Just two years since her controversial appointment, Michelle Guthrie has been unceremoniously dumped from her role as ABC Managing Director.

That she was former Prime Minister Turnbull’s pick and that she has now been terminated so soon after Turnbull's similarly inelegant dumping by his Party, is at the very least an astounding coincidence.

According to the national broadcaster's media statement:

'The decision follows discussions over several months that concluded when directors resolved that it was not in the best interests of the ABC for Ms Guthrie to continue to lead the organisation.' 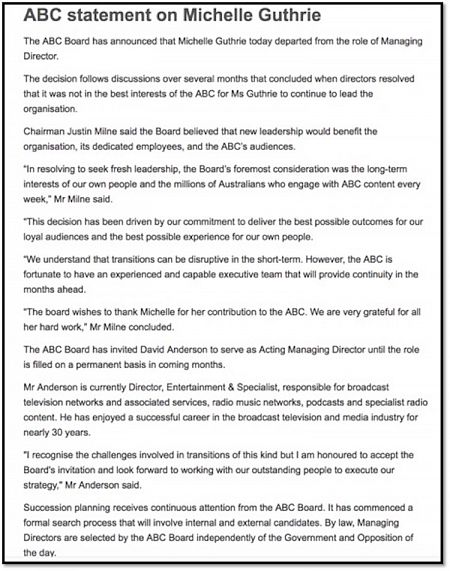 ABC Chairman Justin Milne then appeared on ABC 24 to discuss Guthrie's departure, but managed to shed no further light on why this decision was made in apparent haste, halfway through Guthrie's contract and, seemingly, without Guthrie being made aware that she had somehow failed to deliver on the terms of her contract.

Milne's TV appearance followed his earlier message to ABC staff of Guthrie's exit, in which he wrote:

'The board has given long and detailed consideration to this serious matter.'

By contrast, Guthrie said in a written statement:

'While my contract permits the Board to terminate my appointment without cause and with immediate effect, I believe there is no justification for the Board to trigger that termination clause. I am considering my legal options.'

It certainly doesn't sound as though there had been discussions over several months which also included the managing director. Indeed, if a 'long and detailed consideration of the matter' had been underway, Guthrie being sacked without a succession plan already in place seems to back up her version of events. What was the ABC Board discussing – without the MD – if not who would replace her?

Anyone smell a rat that the ABC board sack the ABC managing director 6 months out from a Federal election?

'Michelle Guthrie had an incredibly challenging job for any person to be successful in, especially in the current climate of Government cuts and attacks on the ABC.'

After five years of Coalition rule, it can be safe to assume that this iteration of ABC board directors – who are appointed by the governor-general on the recommendation of the government of the day – has the stamp of approval of the Abbott/Turnbull/Morrison Government.

The public broadcaster's managing director is appointed by the ABC board — so Guthrie, too, was originally a popular appointment among the Coalition.

As Turnbull's choice, however, Guthrie was never going to sit well with the Morrison "new generation" Government. For his part, the latest Prime Minister admitted that he had been informed by Communications Minister Fifield last night (ahead of ABC staff and the nation) of Guthrie's exit, before mumbling something about the ABC Board being autonomous and their decisions independent.

With the eloquence to which we are becoming accustomed, Prime Minister Morrison said:

'Well the ABC Board, um, that's their job, to decide, um, how well that show's being run... Let's not forget, they're an independent board ... '

Scott Morrison was informed last night by the communications minister to terminate Michelle Guthrie as managing director of the ABC. #MediaWatch #auspol pic.twitter.com/RisqOD0Pqi

And no one can say that the current PM and former Treasurer hasn't done all he can to keep the ABC "independent", including cutting funding at every opportunity, to help facilitate said independence. Just like his "accidental" accession to the role of PM, there is never any blood on this Prime Minister's hands.

With Guthrie's Murdoch media pedigree, speculation about whether she was a Murdoch stooge has coloured public opinion about her motives in joining the ABC. A series of redundancies under her stewardship, combined with her legendary lack of accessibility enabled by keeping the media firmly at arm's length, has not played well into this narrative.

However, it must be said that Guthrie's sudden sacking, given her close connection to previous PM Turnbull, would indicate she has not done the bidding of the Murdoch machine — at least not effectively enough.

As much as I’d like to think of it as a response to bad management at the top, I think we all deserve to know why Michelle Guthrie has been sacked. Too many questions and ‘coincidences’ of timing. Way suspicious. #auspol #abcnews #saveourabc

'Let me start with the premise of your question. My view is the Minister [Mitch Fifield] has the right, like every other Australian, to express a view about ABC content and we have processes to deal with complaints, and they are being followed.'

Michelle Guthrie's efforts in an incredibly difficult job for the past two years should be respected. While I am not privy to the issues behind her termination, I believe the ABC Board has acted in the best interests of the ABC.

However, it does trouble me that another high profile woman has lost her job after a very rough ride in the media. It is not a good message for Australian women.

That her departure from the ABC was first "exclusively" reported by The Australian, apparently, before the ABC newsrooms had had their morning coffees, would also indicate that only the ABC Board (minus its MD), the Government and possibly News Corp were aware of the sudden need to fire Guthrie.

If #Guthrie was the genuine article & concerned about the #ABC she would have arranged for her address to #PressClub to be televised. Fiercely protecting her job more like!@DocWSJames@GetUp
Fiercely protecting the ABC and Michelle Guthrie https://t.co/Mt5wjcmOo2 @IndependentAus

As much as I’d like to think of it as a response to bad management at the top, I think we all deserve to know why Michelle Guthrie has been sacked. Too many questions and ‘coincidences’ of timing. Way suspicious. #auspol #abcnews #saveourabc