Mark Scott's 'me too' strategy puts ABC on track for redundancy

ABC managing director Mark Scott's cutbacks in 'niche' areas, such as women’s sport and rural services, to focus on the internet, is both misinformed and misguided, writes Professor Stephen King from Monash University (via The Conversation). 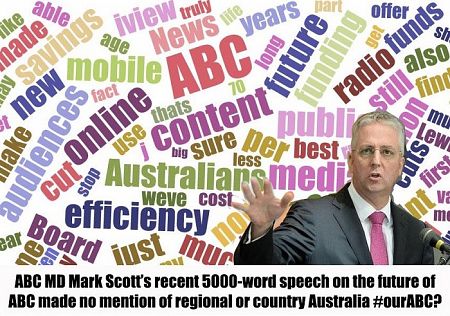 The ABC under former Liberal Party staffer Mark Scott is increasingly being centralised around the ABC headquarters in Ultimo, Sydney (Read the speech referred to by @Nick_Xenophon here.)

Is the ABC trying to make itself redundant? Because that appears to be its strategy. Here’s why.

The ABC is expensive. In 2013 it was allocated more than A$1 billion of taxpayer funds. The ABC claims, however, that its real funding since 1985-86 has dropped by about one quarter. And the current federal government has cut further — A$120 million in the May budget and a further A$207 million over four years.

The ABC has responded with cutbacks in “niche” areas such as women’s sport and rural services and a renewed focus on internet-based services.

But with much traditional media “doing it tough”, should we care about the ABC? Or is it simply redundant?

Why do we have the ABC?

How is the ABC different from the commercial free-to-air broadcasters?

Under its Charter, the ABC focuses on the “Australian story”.

'… programs that contribute to a sense of national identity and inform and entertain, and reflect the cultural diversity of, the Australian community.'

But the commercial networks have similar obligations. The three primary commercial channels are each required to broadcast an annual minimum of 55 per cent Australian content between the hours of 6am and midnight. In practice they exceed this requirement.

Arguably, the commercial networks tell the Australian story better than the ABC. In 2013, all of the top 20 programs on commercial television were Australian reality TV, sport or drama. Australian drama occupied five of the top ten most-watched series.

The problem with the ABC is not that it is unique. Its problem is that it is not unique enough.

Who's going to be most affected by #ABCcuts? The people who can least afford it, that's who. http://t.co/jXKrFovKuH pic.twitter.com/7Nzj16vJCL

Is digital media the way forward for the ABC?

"Competition in the media space is intensifying and audiences are asserting their power. The ABC needs to meet the surging audience demand for online and mobile services while, at the same time, securing and strengthening our grip in the traditional content areas. We must be the home of the Australian story and content across all platforms."

This strategy is both misinformed and misguided.

It is misinformed because, for most Australians, free-to-air television is still the dominant source of news and entertainment. Australians are spending less time in front of the television and more time in front of other screens, such as laptops and mobiles. But the shift is slow. In 2013, Australians watched an average of 96 hours of broadcast television each month, compared to just over five hours per month viewing video on a PC or laptop and a little over two hours on their mobiles and tablets.

The strategy is misguided, because any unique role of the ABC is eliminated on the internet. The ABC cannot uniquely tell the Australian story because thousands of Australians tell their story online every day, using blogs and social media. The ABC cannot differentiate itself as a source of quality news when it has thousands of internet competitors, including the New York Times and the BBC.

If the ABC wants to make itself irrelevant and have increased pressure on its funding then it should concentrate on its digital strategy.

How Mark Scott and the ABC board are centralising the ABC using the federal cuts as an excuse https://t.co/DrhfSolNFs cc @noreasonspec

Using the BBC as a model

What is the alternative?

The UK provides a good example of how to make public broadcasting work. The BBC is one of the world’s most respected broadcasters. And it is government-owned. It thrives because the UK television industry has been reformed.

The BBC might appear to have a lot more competition than the ABC. In Australia, the government-owned ABC and SBS face off against three commercial broadcasters. In contrast, the UK, has around 60 channels, ranging from full-service commercial networks to highly specialised niche channels.

However, the BBC has a unique position. Competitive reform in the UK allowed new entry and innovation in free-to-air television. It also focused the public service obligations, such as content requirements, on the BBC. Rather than being a “me too” network, the BBC has a mandate that is distinct from the commercial broadcasters.

In contrast, free-to-air television in Australia has a commercial oligopoly that, with government assistance, prevents new competition despite there being plenty of spectrum available. The commercial networks claim that they need “protection” so they can meet their public service obligations, like Australian content.

Fine! Remove most of the obligations and open up free-to-air television for new entry. Focus the obligations on the ABC and make the ABC truly unique. This would benefit viewers through increased choice and provide an ongoing rationale for the ABC.

In Mark Scott's decision to put his eggs into the digital space, he is cutting off the rural and regional... http://t.co/RP3zpCWI4Q

Sensible reform of free-to-air television will help the ABC. But its funding will remain directly tied to government budgets.

In contrast, the BBC’s funding is largely independent of government budget decisions. The UK has a “television licence” system with the majority of the licence revenue dedicated to funding the public broadcaster. While the government formally sets the fee, it does so after discussions with the BBC. And the BBC collects the licence revenue.

Australia used to have a similar system. Between 1956 and 1974, the ABC was largely funded by television licences. The Whitlam Government abolished the licence in 1974, leaving the ABC exposed to the whims of government funding.

It is not clear that a dedicated ABC tax, whether applied as a television licence or funded in some other way, would be politically acceptable in Australia. But without independent funding, the ABC will face more cuts from all sides of politics in the future.

The future of the ABC

To have a future, the ABC needs to abandon its “me too” strategy. It needs to be unique. If it focuses on the internet, then it guarantees it will lose its uniqueness and its rationale.

Rather than cutting back its unique services, the ABC needs to emphasise its uniqueness.

The ABC needs to push for competitive reform of Australia’s free-to-air television broadcasting system so it can differentiate itself and its obligations.

The commercial broadcasters will oppose reform. These broadcasters do not like sharing various public service obligations with the ABC. But they like competition even less. Real reform of free-to-air broadcasting will open up the spectrum to competition and create a lasting role for the ABC.

This article is based on work in progress by the Monash Business Policy Forum looking at media reform in Australia. It was originally published on The Conversation. Read the original article.

Mark Scott: The man who delivered the final blow to your ABC. http://t.co/LjIKDvFFpV http://t.co/Y5L1b8DCdF http://t.co/e1vHUNxmd7