Making sure there are no more ‘Murdochs’

After more than sixty years in the media industry Rodney E Lever has come to the conclusion that anyone who wants to publish a newspaper or a magazine should have to obtain a licence to do so.

AS KEITH RUPERT MURDOCH slides into his 84th decade, I believe the time has come for Australians to consider the future of this country’s media. It is a matter of the greatest importance.

Half a century ago, Murdoch the younger, more or less inheriting from his father a desire to dominate the media in this country, determined that he would force his own political and economic opinions down the throats of Australians, whether they liked it or not.

He has damaged democratic politics in Australia to the very brink of disaster, including support for our involvement in meaningless wars in which many Australians died. He has carried the same rotten disease to Britain and to the United States, with perhaps a lesser impact, but nevertheless significant effect.

Certainly, Keith Arthur Murdoch was a far better journalist than Keith Rupert ever was, but Rupert slid into the opening his father had left him.

With natural cunning and an amazing gift for borrowing mountains of money ‒ but generally meeting his debts by constant growth ‒ Rupert began his own career with the family owned The News in Adelaide and a small magazine publishing business in Melbourne. He started at the top as managing director. He has never worked as a journalist.

After more than sixty years in the media industry myself, I have come to the seriously considered view that anyone who wants to publish a newspaper or a magazine should have to obtain a licence to do so and then must be totally responsible for everything that is published in that newspaper. A similar requirement should exist for the 21st Century rush of online publishing in the variety of media we carry around with us today.

Without some form of control, anyone can run amok with any amount of lunacy and illusion lacking neither fact, thought, reflection or study. Perhaps the former Labor leader Arthur Calwell, who inspired the cry “Curse the Press” to a generation of cartoonists, will be vindicated at last.

I can imagine the roar that would come from the throats of existing media owners: Freedom of the press! Freedom of speech!

I too would say:

No one at the very head of the mainstream Australian media today has ever worked as a properly trained and ethically educated journalist (with the sole exception of the current head of the ABC).

Nothing in this world is free today.

To own a radio station or television network requires a licence. We need a licence to drive a car or own a dog. We must have a registration plate fixed to the car that tells the world who we are. Each of us is responsible to the law. It has become an essential part of our civilisation and without it we go back into the jungle.

That Rupert Murdoch has contempt for the law is one of the characteristics I saw in him over 20 years and the current British trials have confirmed it once again.

Two thousand years ago the Roman poet Persius, who lived for only thirty years, recognised that no man was truly free unless he could live his life exactly as he himself pleased. Right through history, such men have existed — men who have claimed absolute freedom and have exploited it to the detriment of everyone else. Two thousand years of English and Roman history shows that the use of invincible power, even when designed as military leadership or religious practice, is no way to manage nations.

Power had to be restrained and that led to what we, in the West, boast of as democracy.

But democracy is often abused.

“… democracy is the worst form of government except all the others that have been tried.”

When the power to print on paper arrived, it began as a source of invaluable information and became greedily absorbed. By the 17th and 18th centuries, mankind was grabbing at the chance to read easily and cheaply, and to be informed.

Every newspaper printed in Australia today had its origins in its ability to spread the word of the arrivals of ships carrying goods and information from England and Europe to the first settlers, as they established homes and businesses and imported clothing, furniture and food. By the end of the 19th century, the early newspapers had achieved respectability and reliability and a genuine trust that the population valued in them.

That value is gone now. Greedy and power-hungry individuals changed the nature and the influence of newspapers in the 20th century.

Rupert Murdoch was not a prolific reader as a young man when I knew him. He would buy books, usually paperbacks, to read on a plane, but he always left them behind half read — perhaps only two or three chapters.

I sat with him many times when he studied copies of his own newspapers. He never read more than the first couple of paragraphs of a story. He liked to spread the papers out on the floor and look at the headlines. He loved snappy headlines.

I first met him in Melbourne, when I worked for his father’s company, The Herald and Weekly Times, and then went to manage his family magazine publishing company and became a management executive for News Limited in Darwin and Brisbane.

I left News Limited while Rupert was in England after buying the News of the World. News Limited was already betraying the immense power of journalism and tarnishing the character of my profession in ways I could not accept.

In America, Rupert became fascinated with the life and times of the powerful American publisher William Randolph Hearst — the originator of the “yellow journalism” Murdoch champions throughout his empire:

When Rupert started Fox News in 1996, he hired Roger Ailes, a talented television producer, to run what was to become Rupert’s principal force in his attempts to maintain a dominant role in US politics. In a recent New Yorker magazine article, the U.S. writer Jill Lepore, wrote about Ailes as a shadowy eminence in Rupert’s life.

A dedicated Republican, Ailes was noted for his abusive, offensive and intimidating character, using every element of his new power to make personal attacks on the Democrats and anyone else who caught his attention as an enemy of the Republicans and its Tea Party sub-branch.

There was even a time when Murdoch himself became nervous about Ailes, but could not find the courage to fire him. Whatever, Murdoch was well aware that he needed Ailes to maintain his supremacy in the U.S. television news industry.

In 1941, Orson Welles produced the movie Citizen Kane. It was clearly based on the life of W R Hearst — though Welles denied this, saying Kane was merely a type.

“A man like Kane believes that politics and the nation are for his own pleasure and nothing else. Such men tend toward the newspaper and entertainment world. There is a morbid preoccupation with the public and a devastating low opinion of the mentality and the moral character of the public.”

In those words he was defining Rupert Murdoch, too.

Rupert has managed to make his place in history around the world. This can be his only epitaph:

His papers either will have new owners or they will fade away and die after him. His family will surely not want to own this tarnished legacy.

Australia, Britain and the U.S. have all learned something from Rupert’s history. What will become of that knowledge is for future generations to decide.

Will they choose “a licence to publish”? 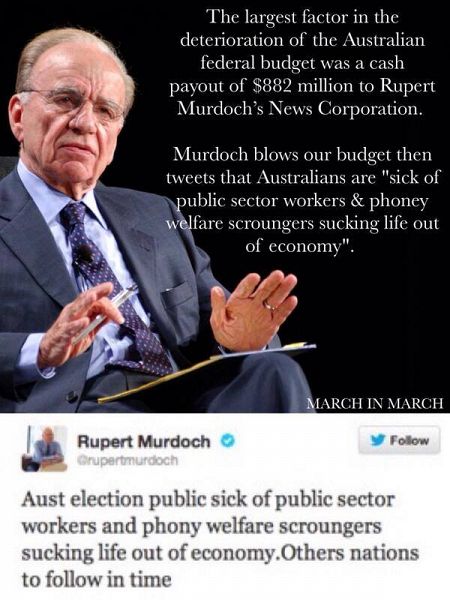 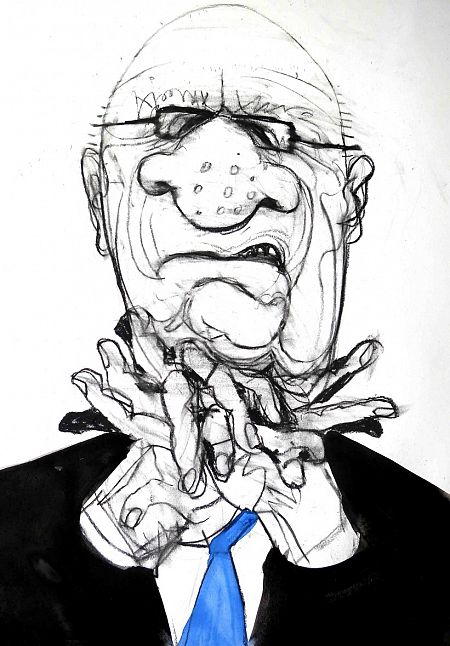