By Tasmanian Times | 13 April 2012, 1:35am | comments |
In a shocking demonstration of non-compliance with regulations, 478 cattle and sheep suffered and died last year on a horror 36 day voyage to Turkey. Suzanne Cass reports. 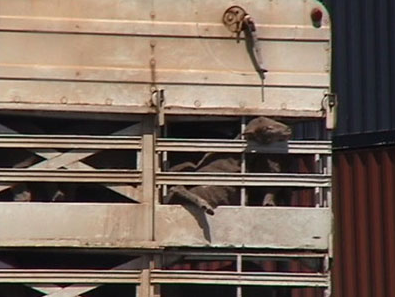 The exporter is believed to be Livestock Shipping Services, and the ship is believed to be the Ghena — an old vehicle transporter built in 1984 and formerly known as the Merlion Ace. Converted vehicle transporters are almost entirely enclosed, meaning the animals are trapped in the hold of the ship. As the ship travels into hotter climates, the hull heats up exponentially.
Like all live export ships, it is registered in a flag of convenience port (Panama in this case). It is reported that the Ghena will not be permitted to load animals in Australia again because it no longer complies with Australian Maritime Safety Authority regulations, implemented last December.

The mortality percentage of the Portland cattle exceeded the reportable level of 1.0% prescribed by the Australian Standards for the Export of Livestock (ASEL). The mortality percentage of the Portland sheep and the livestock loaded in Fremantle did not exceed the reportable level and is therefore not discussed further in this report (therefore their suffering doesn’t matter, because 1% of mortalities in cattle and 2% mortalities in sheep are considered ‘acceptable’ and these animals are just ‘collateral damage’.

It has become obvious to campaigners that AQIS often does not know how many animals are loaded onto these ships, so the mortality reports cannot be relied upon. For example, in the case of the broken down Al Messilah incident last August, 2,519 sheep simply ‘went missing’. On the face of it, more sheep were unloaded than were loaded in the first instance. DAFF’s correspondence refers only to ‘approximate’ numbers).

The consignment was accompanied by an AQIS-accredited veterinarian (AAV) who reported that the main or a significant contributing cause of cattle mortality was pneumonia.

Read the rest of her story on the Tasmanian Times website.

6 May 2018, 4:30pm Environmental issues caused the death of Vanessa Goodwin and the Tasmanian Gover ...

16 September 2016, 7:30am Big business funds parties which support its interests while unions support the ...

Scandal-ridden Careers Australia, a Liberal major donor, back in spotlight