How the world's top brands greenwash the public

A new book by Guy Pearse reveals the so-called "green revolution" is largely being faked by big companies trying to "greenwash" their environmental credentials. Graham Readfearn from DeSmogBlog reports. 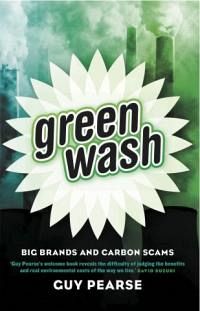 "I GUESS it is easy being green," said Kermit the Frog as he bounced around a Ford Escape Hybrid in a 2006 television ad campaign.

During the ad, Kermit displayed his innate talent for not blinking, which – it has to be said – is essentially due to his congenital lack of eyelids.

But had Kermit blinked, he would have missed the small print at the bottom of the ad, which showed that, at the time, this "green" vehicle had a fuel consumption slightly worse than the US average.

But that seems to be the rule when it comes to claims of climate-friendliness made by some of the world's biggest brands.

Check the small print, and the responsible green hue soon fades to something resembling bullsh*t-brown (or whatever color denotes hypocrisy). At least that's the conclusion after reading Australian author and researcher Guy Pearse's latest book. Pearse spent close to four years immersing himself in some 3,000 TV commercials and viewing about 4,000 print and web adverts, all of which make claims of climate friendliness (I disclose here that I had a small paid role as a fact-checker on the book).

After checking the brand's actual contribution to climate change (or their lack of transparency) in more than 700 company reports, Pearse finds in Greenwash: Big Brands and Carbon Scams that the green revolution is being either grossly overblown or faked.

Some 24 industry sectors, a host of "eco-celebs" and most of the world's top brands are covered in the book and very few emerge unscathed.

Pearse, a research fellow at the University of Queensland's Global Change Institute, finds that brands pull a series of common tricks when they make claims that they're cutting their emissions. For example, take Wyndham hotels, who don't count the emissions from the 7,000 franchised properties that bear their name.

Or Panasonic, which ignores the emissions from the raw materials needed to make all their electronic gadgets (a common omission). Then there's the regular trick of having a target to cut emissions, which is based on carbon intensity (such as CO2 per sq metre of floor space or per product) but ignoring the fact those savings are rubbed out many times over as companies expand.

Other companies claim concern for the climate while failing to disclose their carbon footprints. Sometimes, Pearse simply reveals rank hypocrisy, such as Royal Bank of Canada buying offsets for a carbon-neutral Olympics torch relay, while also financing tar sands and coal projects.The book is sure to leave many climate conscious consumers feeling like they've been had (no doubt the climate would express some dismay too, if it could). But should consumers feel hopeless? Pearse told me:


I don’t think people should feel hopeless about the greener product, but they need to distinguish between the individual product and the climate-friendliness of the larger brand. It’s hard to argue that a brand is that concerned about climate change if the overall footprint of its products is still growing while it’s busy conveying the opposite impression. We also need to be realistic about the number of people buying the green product, and the cumulative impact, if we stay on the path we’re on.

Pearse also reserves some criticism for environmental groups who allow their brands or their projects to be aligned with emissions-intensive businesses, including major coal and oil companies or their financiers (think Earth Hour).


Some environmental groups shoulder much more responsibility than others. There’s nothing wrong with environmental groups seeking out corporate champions. However, when these groups routinely misrepresent companies whose products have a growing carbon footprint as ‘climate savers’ and the like, they’ve really become a part of the greenwashing problem —lending credibility to the notion that big brands are going green when they’re not. That winds up feeding complacency and a misplaced faith in a revolution that’s not actually happening.

So after spending hundreds of hours looking at green claims in adverts, does Pearse have any "favourites"?


For sheer entertainment value, my favourite green ad is probably Audi’s Green Police Superbowl commercial. The green billboards are also right up there – from Coke’s one in Manila with its 3,600 carbon-absorbing tea plants to Ricoh’s 3 renewable billboards in London, New York and Sydney – all of them helping to greenwash growing carbon footprints. Some of the fashion industry brands are pretty memorable too ― from the Global Warming Ready campaign by Diesel to the ‘Look hot while discussing global warming’ poster by Levi’s.

One of the most striking elements in the book is how Pearse reveals time and time again how major corporations will heavily market even the smallest of environmental achievements, while ignoring their direct interests in fossil fuels. So who does Pearse pick as the worst of these greenwashers?


Shell probably wins as the most prolific and shameless case. Even as they seek to expand oil and gas production by a sixth in five years, there seems no limit to the fantasies woven into their climate-friendly advertising pitch: from billboards with smokestacks emitting flowers to CO2 molecules being chased with butterfly nets, to the ‘Let’s grow our own fuel. Let’s Go’ posters, to their sponsorship of solar vehicles in the Eco-Marathon. It’s as relentless as it is disconnected from Shell’s core business.

(This story was originally published in DeSmogBlog.)