How debt peonage dispossesses the masses

Why, after 200 years of industrialisation, are Westerners generally poor, overworked and swamped by debt, asks Matthew Mitchell. 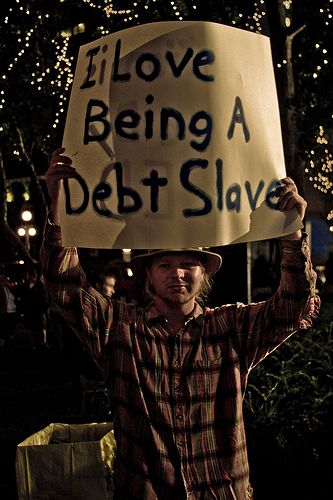 WHY, after more than 200 years of industrialisation, are most Westerners so poor?

Despite the massive productive capacity of industrialised nations (such as never seen before in history) vast numbers of us have large mortgages and little access to capital ourselves, thus condemning many to a life of peonage (wage slavery). Some may point to the holidays and luxuries we enjoy, but others are likely to argue that these are a necessity to cope with the intense demands on us in terms of congested roads, long work hours and a lack of the basic family support readily available in many less-developed communities. In fact, for many, their personal prosperity is marginal, and their entire lifestyle is vulnerable to a loss of job, or even a large increase in fuel or utility prices.

There is simple explanation that explains where the real wealth has gone and it revolves around the role of debt.

A simple example will make this clear.

Imagine you have a vast number of small homestead farmers (such as existed in the U.S. in the early 1800's). One of these famers, let’s call him Ted, is convinced that purchasing new machinery will increase his output allowing him to sell more produce at a lower price. The lower price ensures his produce will sell before his neighbours', whilst the larger volume allows sufficient margins to cover the debt repayments. Leaving aside the basic selfishness of Ted's decision here to grow bigger at the expense of his neighbours, so far so good (for Ted). The trouble is that Ted's neighbours are quickly going to find that they cannot compete. Thus, they too will be forced to buy the new machinery that allows them to increase production. However, they cannot guarantee the sale of their produce, unless they undercut Ted. Ted, in turn, is forced to reduce his prices, however, with this new “market competitive” price, Ted, and his neighbours find that they cannot service their debts.  By seeking to screw-over his neighbours for short-term gain, Ted has financially doomed them all. It is not long before a large agri-business owns the farms of Ted and all his neighbours.

This appears to be what has happened recently to farmers in Africa and there is evidence of this in the history of big-agriculture in the U.S. as per Stewart (2010):


Farm unrest was closely tied to the variability in farm prices, yields, and incomes across the northern states. Second, unrest was highest in states with high rates of farm foreclosures (Stock, 1986). On the frontier, the typical farmer would have had a neighbour whose farm was seized by creditors and thus cause to worry about his own future financial security.

The solution to these problems appears to lie in co-operation through agreements such as the Dakota Farmers Alliance, rather than competition (Stewart 2012):


The grievances of late nineteenth century farmers [...] included low prices for crops and livestock, the unscrupulous business practices and undue political influence of the railroads, the high cost of credit and the burden of debt, and the growing threat of foreclosure. Many farmers saw an opportunity to harness the powers of government for their own benefit through collective action.

It seems that now the US agricultural system is irreversibly skewed against the small holding.


The problem is that our land use laws are geared toward saving large tracts of farmland, promoting corporate style farms, not families or the family farm. Because of this, a young family who wishes to farm cannot afford the vast acreage, nor can they afford the small farms that are left, because those have been bought up by wealthier folks who simply wish to live in the country.

The negative effects of market competition became more obvious to me recently when dealing with someone with an interest in a Chinese textiles factory. The company sells T-shirts and similar apparel online. I asked what the company's competitive advantage was. This person looked up a price for T-shirts on the internet and announced that he could produce them 50 cents cheaper. I took this logic to its conclusion: How do you think your competitors will respond to this? The answer is obvious; they will be forced to drop their prices so as to match the market rate. In China, the pressure to achieve this price reduction is unlikely to result in some new technical advance that increases productivity (as competitive market theory claims) it is far more likely that the cost reduction will be borne by workers, either through a lower hourly rate, longer hours, or both.

This is the fundamental problem of competitive market capitalism. Once all genuine productivity improvements are made, it is a race to the bottom in terms of conditions and pay. My Chinese friend and I considered operating as a Fairtrade producer, and although I have much respect for the Fair-trade movement and its proponents, it is not a solution for China. According to his analysis, Fairtrade products will command a significantly higher price, so high in fact, that a locally produced product would cost the same. So why would a conscientious Australian not just buy an Australian made t-shirt? We know that work conditions in Australia are regulated and fair (so far) so why buy Chinese and trust that they are doing the right thing? It just doesn't make sense. The whole reason of taking production to China in the first place was to make products cheaper, if they are going to be same price, we may as well produce them here. China is in a bind. It entered the race at the bottom, and there is no way up from there.

Regardless of what the theorists say about debt-financed competition leading to efficient marketplaces, we now have now done the experiment (Monbiot 2012 makes a similar case).  The inevitable outcome is the relative impoverishment of 99% of the population. Monbiot (2013) has pointed out that the evidence is clear if we look at the value (in terms of net property wealth) of people in the UK:

There is no substantive “trickle-down” effect worth mentioning.

It seems that through debt instruments our elites have perfected their methods of obtaining property as stated by Gerrard Winstanley in 1650 (Hill, C. (1969) “Reformation to Industrial Revolution”, Penguin Books, pg 146):

The fact is that the accumulation of property in the hands of elites is not a new phenomenon. Saul documents these efforts and successes over past and recent history. (Saul, J.R (1992) “Voltaire's Bastards: The Dictatorship of Reason in the West”, Penguin Books.)

The solution he appears to advocate is a time honoured one, used repeatedly over the ages. It is a solution that almost always leads quickly to a more equitable distribution of wealth as well as a prosperous society. It is simply debt-forgiveness — the writing off of all debts.

Property has been accumulated by people who do not using it in the service of society but rather extract rents from those that do work. The list of renters includes indirect owners such as holders of shares in large companies that own property. Tawney (1920) refers to such ownership as 'passive property, or property for acquisition, for exploitation, or for power' (pg 62). This is, in fact, a form of private taxation paid today by nearly every productive citizen.

How do we then prevent this situation? I suggest the solution is related to a much more regulated (and perhaps government run) system of banking as well as the elimination of profiteering, preferring instead that people receive a fair reward for their services rather than an excessive one (as suggested by Tawney, 1920) and that the ownership of property be returned to those that are using it for productive purposes, not to idle and absent landlords or their salaried servants.

I finish with an observation made by Professor Tawney back in 1920, which is even more relevant today than ever:


It is not merely that the ownership of any substantial share in the national wealth is concentrated to-day in the hands of a few hundred thousand families, and that at the end of an age which began with an affirmation of the rights of property, proprietary rights are, in fact, far from being widely distributed.  Nor is it merely that what makes property insecure to-day is not the arbitrary taxation of unconstitutional monarchies or the privileges of an idle noblesse, but the insatiable expansion and aggregation of property itself, which menaces with absorption all property less than the greatest, the small master, the little shopkeeper, the country bank, and has turned the mass of mankind into a proletariat working under the agents and for the profit of those who own.