Housing unaffordability in Australia is real, Joe, good job or not

Continual cost rises across the board are beginning to bite a lot of people whether they have one of Joe Hockey 'good jobs', or not, writes Leslie Zeder.

SINCE THE Commonwealth Treasury Secretary, John Fraser expressed concern that Sydney is “unequivocally” in the grips of a housing price bubble at the start of June, the issue of housing affordability in Australia has taken the media and the public by storm.

If you’ve been reading or watching the news over the last month, then you will have noticed not a week has gone by without Australian housing affordability being on the tip of journalists’ tongues. Every few days there’s an update on the topic, a new slant, an opinion piece (yes, yes, I know) and another interview gaffe made by a politician.

When Prime Minister Tony Abbott’s reaction to the Treasury Secretary’s statement is to say “I do hope our housing prices are increasing”, it shows just how disconnected he is from the concerns of many Australians, especially those of first home buyers and youth, who see the Australian dream of home ownership slipping away from them.

Treasurer Joe Hockey isn’t helping. During his latest ABC Q&A appearance, it was pointed out Hockey pays $270 taxpayer funded travel allowance to his wife as rent to stay in her house when travelling. His response – "is there a problem with that?" – shows the “age of entitlement” is anything but over within political circles.

Continual cost rises across the board are beginning to bite a lot of people whether they have “good jobs”, as Joe Hockey advises, or not.

When you consider housing costs along with:

then is it any wonder people are increasingly becoming more and more frustrated with our leaders and day to day living?

The Coalition believes accusations of being out of touch with the public are unfounded. But when you have Joe Hockey saying in order to buy a house you just need to "get a good job that pays good money" it only brings the point home (pun intended).

Even more so, when you consider the situation Victorian MP Tim Smith finds himself in currently. If it wasn’t true, it would almost be funny. The LNP’s Parliamentary Secretary for Affordable Housing for the electorate of Kew cannot afford to buy a house in Kew despite earning a base salary of $150,000! The median Kew house price sits at a whopping $1.69 million. When the housing affordability minister, on such a huge salary, cannot afford to own a roof over his head, something is deeply wrong.

Let’s take a look at some facts:

'Sydney land prices rose 512 percent faster than inflation between 2001 and 2011, while the city’s population only grew 16 percent.'

Take a look at both these graphs below taken from an article by Greg Jericho in The Guardian: 'People are buying Ferraris, Joe Hockey – that doesn't make them affordable'.

The first shows exactly how astronomical Sydney house prices have become and both graphs show wages have fallen well behind house price rises throughout Australia: 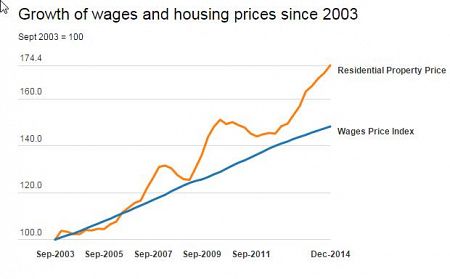 Sydney and Melbourne continue to lead the rest of the country in soaring house prices, with the two cosmopolitan hubs experiencing annual price increases of 15% and 9%. Brisbane, Adelaide and Canberra meanwhile experience modest annual rises. In 1993, houses were approximately three times the average income in Australia, now they are about five times.

Offshore investors over the past two to three years have been fuelling the housing market. The Australian Bureau of Statistics (ABS) has reported new investor lending surpasses 50% of all new home loans (excluding refinancing).

Just take a look at this ominous shark-shaped graph — the signs couldn’t be more in your face: 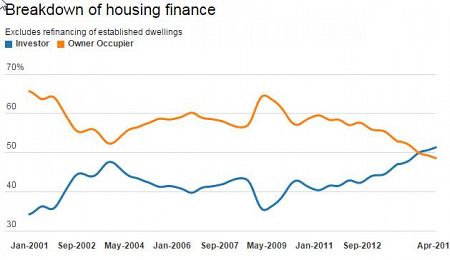 But, let’s not forget that another problem facing first home buyers is not only the cost of the home, but obtaining the initial loan. First they need to have enough to put a deposit together and then they need to keep up with monthly repayments. In an uncertain economic climate, this is a difficult task.

So, does all this sound fair when we take a look at the generations who have come before? Many of the Baby Boomers were able to raise a family and pay a mortgage on one income alone? In this day and age, that sounds like a far-off and fanciful dream for most people, especially the younger generations.

At what point did the Australian housing market become more about turning a profit, than building a home?

Housing unaffordability in Australia is real, Joe, good job or not

24 June 2015, 9:30am Continual cost rises across the board are beginning to bite a lot of people whether ...
Join the conversation
comments powered by Disqus
News updates