GVK Hancock's Galilee mine might have scored a legal win but can it score the funds?

Gina might have bagged a win in court, but it's a hollow victory for Rinehart's GVK Hancock's Galilee coal projects if the company can't find an investor to stump up the finance. Lachlan Barker reports.

DESPITE ITS court win over environmental appeals, GVK Hancock is even further away, financially.

Most, when asked to name a coal project in the Galilee Basin of Queensland, can bring Adani’s $16 billion Carmichael mine to mind. However, there are nine proposed mining projects up there and Gina Rinehart's GVK Hancock controls three of them. These are the Alpha, Kevin’s Corner and Alpha West mines.

Recently, GVK Hancock had a win in court in which an appeal by Coast and Country against the Alpha mine was rejected.

However this win for GVK Hancock doesn’t really get them anywhere further forward toward building the mine, the reason being that the finances for the project look very doubtful at this stage.

Adani’s Carmichael mine is an A$16 billion project, and Adani’s current financial standing shows a market cap of US$1 billion. However already a host of banks have walked away from financing the Carmichael mine, at latest count 11 international banks have refused funding. Additionally, two of Australia’s big four, the Commonwealth (CBA) and the National Australia Bank (NAB), have turned the project down.

The plan is to mine 60 million tonnes of thermal coal at peak production, for export to India from Carmichael. However the coal price is in the cellar, in structural decline no less. At the same time, Indian Prime Minister Narendra Modi has pronounced that his goal is for India to cease importing coal, possibly as early as 2018. 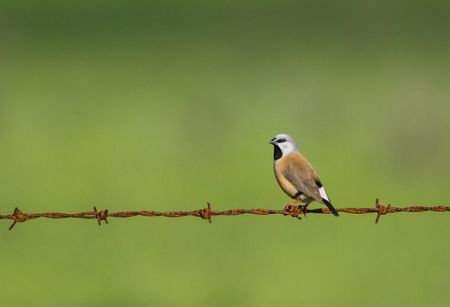 Bird on a wire all right. The Southern Black-throated Finch is one species under threat from the Galilee coal projects.

The Adani information is mentioned as a comparison because GVK Hancock is in a similarly dire financial position.

A year ago, Tim Buckley of International Energy Economics and Financial Analysis (IEEFA) reported for RenewEconomy that GVK’s market cap was US$400 million . Now, in September 2015, GVK Power’s current market cap is a mere US$170 million, while, as Buckley stated via email, their crippling net debt runs at ‘greater than US$3 billion’.

So if GVK Hancock is going to get these mines started, they will need finance. The overseas bank appointed as financial advisor back in 2010, French bank Societe Generale, in 2014 ruled out financing the project. So I contacted the big four Australian banks to ask if they had been approached to finance GVK Hancock’s Galilee projects.

Commonwealth Bank has not been approached by GVK Hancock to finance their Galilee Basin coal projects.

CBA takes a robust, responsible and merits-based approach to any project that comes to us for finance, no matter the industry or location.

We assess a project’s environmental, social and governance risks and impacts in strict accordance with our ESG Lending Commitments, and where appropriate the Equator Principles III.

CO2 generated by coal from proposed QLD #Rinehart mine will be more than the emissions of whole countries like Sweden http://t.co/qsJP1gHvq4

ESG stands for 'environmental, social and governance', while the Equator Principles is an industry wide regime summarized as:

‘A financial industry benchmark for determining, assessing and managing environmental and social risk in projects.’

None of which augers well for GVK Hancock I might add, in these days where global warming is a factor in so many resource project decisions.

Westpac made a similar reply:

While Westpac does not comment on matters relating to specific companies or projects we assess all transactions through a sustainability risk lens as part of our normal credit risk procedures.

We apply additional scrutiny to project finance transactions, including applying independent due diligence, as part of our commitment to the Equator Principles.

The National Australia Bank (NAB) hadn’t responded at time of writing, but as mentioned above they will not be funding Adani’s Carmichael mine. This likewise does not auger well for GVK Hancock. 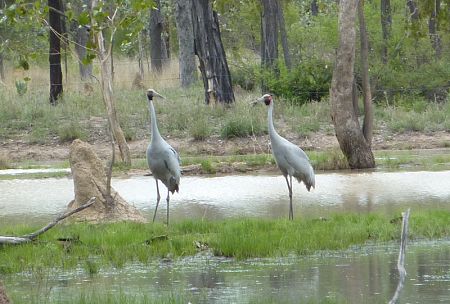 Brolgas wade in the Bimblebox Nature preserve, which is under threat from mining in the area.

ANZ didn’t respond to my query.

At the current Rs7.00/share (Rs:Indian Rupees) price, the market capitalisation of equity for the listed GVK Power is US$170m, a fraction of the more than US$3bn of net debt they have outstanding. As such, they have no financial capacity to advance their Alpha, Alpha West or Kevin's Corner projects. GVK has been trying to sell off assets for some time to reduce financial leverage, but with no success.

The Alpha project sits outside the listed GVK Power company, but this listed company is a 10% shareholder and provided debt guarantees for the project, which was 100% debt financed. If GVK wrote the project off, GVK Power would have no equity left. As such, they need to maintain the pretence their project remains viable.

GVK Coal acquired the project from Hancock Prospecting P/L for US$1.26bn four years ago, and still has a final payment of US$560m outstanding which was due for payment in September 2014. As such, not only would GVK need to raise the funds to build the greenfield mine, rail and associated port infrastructure, but prior to doing so it would also have to raise US$560m to repay Hancock Prospecting.

As such, I would put the prospect of this project moving forward at close to zero, absence a dramatic and sustained improvement in the seaborne thermal coal price.

So the upshot of all of that is that despite the win in court against a tiny opponent, GVK Hancock is as far away financially as ever.

The Australian thermal coal price currently sits at US$62, on a relentlessly downward trending line.

The federal government make mention of their Northern Australia Infrastructure Fund, which would provide funding for projects that cannot raise finance in the commercial market place.

However if that’s all that GVK Hancock have got, they are going to be disappointed.

The Northern Infrastructure Fund holds A$5 billion, while the Alpha coal projects are listed as costing A$6.4 billion to set up. What’s more, Adani have been mentioned in relation to this fund as possibly receiving a financial leg up for Carmichael.

So the maths is pretty clear. The combined GVK Hancock and Adani projects need A$22 billion. As there is only A$5 billion in the fund, they are - in the famously quoted words of Darryl Kerrigan in The Castle – “dreamin’’.

So while the opponents of GVK Hancock’s Galilee coal projects can’t exactly rest easy, they can take comfort in this.

Despite the victory in court, financially GVK Hancock’s Galilee coal projects are about as viable as driving to Jupiter in your car.

Want to know what the COAL-ition is up to? Subscribe to IA for just $5.