Burt Reynolds, Jack Thompson and the business of popular culture

Nude centrefolds created major shifts in media and community attitudes in the 1970s, but controversy continues over what is deemed appropriate, writes contributing editor-at-large Tess Lawrence.

BURT REYNOLDS WAS NAKED and laying on my bed.

Even if it was only his centrefold photo in the single girl's girlie magazine, Cosmopolitan (Cosmo).

Hearing of the actor's death at 82 this week, I took the carbon credited Tardis to another time and place.

HAUNTING SONGS WHERE LIFE SKIDS OFF THE VINYL TRACK

Bearing in mind that magazines are published weeks before the date stipulated on the cover, the soundtrack to our lives might have included songs like Don McLean's 'American Pie', Al Green's 'Let's Stay Together', Melanie's 'Brand New Key', Harry Nilsson's plea 'Without You', Neil Young's 'Heart of Gold', America's 'A Horse with No Name' and working its way up the Billboard charts was Roberta Flack's perfumed hymn to carnal romance, 'The First Time Ever Saw Your Face'.

Burt Reynolds on Why He Agreed to Be One of the First Men to Pose Nude for Cosmo https://t.co/xSC3jjv5Fo pic.twitter.com/07x604a5cP

Some of you are young enough to remember the sweet hauntings of such music that spoke to us of yearning love won and lost, mystical journeys new and past, where life skids off the vinyl track.

In Oz, the music played was more or less the same, except for the disparate likes of, ahem, Benny Hill's 'Ernie, the Fastest Milkman in the West' and the Royal Scots Dragoon Guards amazing hit, 'Amazing Grace' that also hit number 11 on the Billboard charts.

Mind you, in the same year they recorded the 'Russian Imperial Anthem' — that probably won't be getting a replay any time soon.

IN 1972 WE ALSO HAD TWO PRIME MINISTERS. HISTORICAL REFLUX AHEAD?

Are you getting the early '70s vibe? This next bit should help. In true form, in 1972, Australia had two prime ministers, William McMahon and Gough Whitlam. But unlike more recent events, the removal of the 'Tiberius with a telephone' was at the behest of the people.

McMahon's Coalition Government lost to Labor's Whitlam in a Federal Election. The reflux of history may shortly repeat itself.

Against this rich tapestry, then, consider the impact and implications of the Burt Reynolds centrefold.

In painterly homage to the "olde" masters, master fashion and celebrity photographer Francesco Scavullo captured not only the actor's beautiful form and his languid ambience, but also framed the paradox of a generational and gender shift in popular Western culture that still causes debate and argument, as to whether this naked centrefold was a feminist or sexist act. Or both.

It also caused ructions in the media world and what was considered suitable "journalism for women", and threw an incendiary device into the wars between magazines competing for circulation.

Look at the supine image, the pose and the poseur. Risque rather than rude or crude, it could be atop the dome in the Sistine Chapel. Scavullo's use of incubatory lighting creates a warm glow of candlelight. Don't you just want to snuggle up close to Burt and let nature take its course?

I will adopt art historian Sister Wendy Beckett mode and say it is reminiscent of Michelangelo's relaxed, but mortally doomed, Adam near touching the finger of God, is it not?

True, Mickey's Adam is not as hirsute as Scavullo's. Nor does he have a moustache — or a cigarette in his mouth.

Mind you, Michelangelo's Adam has a belly button and that has always worried me somewhat, given he was godly borne and bred. As the origin of the species, I wasn't expecting him to bear the scar of an umbilical cord. He was not of woman born. Michelangelo, I thought, should have lost the cord. But there you go, what would I know?

After all, it is merely an allegorical depiction, but Michelangelo was clearly not a creationist who believed in intelligent design. Perhaps he was sending a message to the future.

If he were painting the Sistine today, with the benefit of the hindsight of evolutionary science and the excavation of remains of our genetic ancestors, he would surely paint Adam as a hairy hominid?

Granted, it might not have proved such a commercial success for the Vatican, in posters and postcards, and sheer crowd-pulling power. Still, if marketed the right way, it could work ...

The man who is a deadbeat away from the Presidency of the United States, veep Mike Pence, is an avowed creationist. The current incumbent Donald Trump might well prove to be the Missing Link.

What does all this have to do with Burt Reynolds? A lot. Stay with me.

She did for Cosmo what publisher Katharine Graham did for the Washington Post.

LOVED this movie!!! What "The Post" gets right (and wrong) about Katharine Graham and the Pentagon Papers https://t.co/xsxiQKvJ9D via @SmithsonianMag

I didn't have the pleasure of meeting Reynolds, but had met and talked several times with Gurley Brown both in Australia and the States.

When she died in August 2012, Independent Australia published an article entitled 'Sex and the Singular Gurley Brown'.

Gurley Brown was a powerful influence. She took the dying magazine that once featured the likes of Ernest Hemingway and gave it a Manhattan Red lipstick makeover, gifting it to younger women and unapologetic sexual freedom. Not only did she transform magazines for women, but she also upped the panty for magazines for men, that were floundering in the revolution, some of them looking as if they were suffering from brewer's droop.

Women certainly bought Cosmopolitan for the pictures, but they also bought it for the writing too.

She cheekily took on her male counterparts with photographer Francesco Scavullo's centrefold of Burt Reynolds. It remains one of the more compelling photographic nudes and this year celebrates its 40th anniversary. I have a copy of that magazine in my library. Whilst Reynolds is handsome in face and form, the cigarette, ashtray and bear rug still jars — that is the bear rug on the studio floor, not on Burt's bod.”

Sex and the singular Gurley Brown. Top piece from Tess Lawrence (who was the 1st female feature writer for the Herald): http://t.co/DEfuZNFp

It's quite normal for millions of men to be hairy, innit? But check out the male bods on today's plethora of matchmaking/dating fake reality TV shows.

Bodybuilding mode requires hair-free, cosmetically and surgically and chemically enhanced contoured waxed/razored/tweezered buffed bods with torsos, with that many ripped six packs they have muscled up into a slab.

Don't even mention facial or ear hair. It's on the nose!

Manscaping is now an industry. We have manscaping technicians.

I Saw The Macho and Ambitious Burt Reynolds’ Deliverance While He Shot ‘Deliverance’ #SmartNews https://t.co/mNbeGc1MLA

Unlike the hairy-chested Burt Reynolds in a scene from the scary, hair-raising film, Deliverance.

The waxed to the max syndrome generational shift applies to women too. The commercially driven cultural abhorrence of female body and pubic hair may, at times, be linked to complex and more ominous symptoms and demands on females to appear pre-pubescent.

There's a bit of blowback on the no-hair front. Consider the defiant Bonds "Join the Queendom" advertising campaign running in electronic and print media. It's the pits. Armpits that is. Hairy ones. Perfectly natural.

The ad is filmed in a forest that could well be the scenic backdrop to Reynolds' perhaps most memorable film role in the hair-raising and menacing, Deliverance, based on the novel by James Dickey.

But that's where any similarity ends.

Join the Queendom. It's the armpits!

When Gurley Brown commissioned Francesco Scavullo's centrefold, she did for Burt Reynolds what Tina Brown's Vanity Fair cover by Annie Leibovitz did decades later in 1991 for a controversial naked "full with child" photo of actress, Demi Moore, since emulated many times, more recently and famously, by Serena Williams.

Meanwhile, back in Terra Australis, in '72, Kerry Packer's Australian Consolidated Press was vying to buy the rights to publish an Australian edition of Cosmopolitan from the Hearst Corporation, founded by legendary media baron William Randolph Hearst.

Gurley Brown had made Cosmopolitan hot property and competition to have a slice of the brand's action was even hotter.

However, ACP was pipped at the post by rivals Fairfax/Sungravure, so the formidable media savvy Ita Buttrose and Kerry Packer outfoxed them by rushing to press a brand new magazine called Cleo.

What is more, they brought out the first edition in November 1972, the same year. Bella mossa!

And ta-da! They also ripped off Gurley Brown's nude centrefold idea and quickly undressed actor Jack Thompson and threw him into that first edition before the ink on the hapless Fairfax contract with Hearst was barely dry. Such chutzpah!

We rarely see such audacious media manoeuvres these days. And sadly, Fairfax management continues its pattern to move with the stealth of a museum dinosaur, selling off its own body parts even as I land the Tardis back home. No emissions. 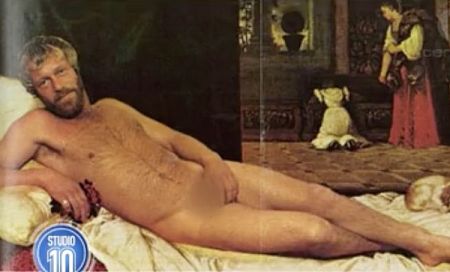 The similarity between the Cosmo and Cleo centrefolds is obvious. Jack, whom I have had the pleasure of interviewing, has more pubes showing than Burt. And Michelangelo's Adam for that matter, whom God has clearly manscaped.

In both magazines, the publication of the centrefold certainly caused international and local ructions, and a major shift in media and community attitudes reflected in today's popular cultural environment — although, as always, controversy continues over what is deemed appropriate.

Fairfax was furious but hey, first in, best undressed.

17 January 2020, 9:00am The real reason Scott Morrison cancelled his Hawaii trip was to postpone a secret ...

5 October 2019, 1:00pm Just hours before the Amazon Synod will start, in what amounts to a Declaration of ...
Join the conversation
comments powered by Disqus
Daily news
Get FREE daily updates from IA to your inbox.
Just in
SHOP AT IA