Is there a correlation between mistreating staff and avoiding tax? Between profiting from people’s misery and tax avoidance?

This occasional series, using the figures from the ATO’s recently released Corporate Tax Transparency Report, will test the hypothesis that there is. If you want to suggest any companies in the Report you think are less that humane in their industrial relations or the focus of their activities, feel free to mention them in the comments and I will see if I can test the hypothesis against their practices.

As I mentioned in my previous Independent Australia article, Transfield, (now Broadspectrum), in 2013-14 had gross revenue of $2.8 billion from a broad range of sectors. One of them is managing the detention centres on Manus Island and Nauru.

According to Green Left Weekly:

'Transfield/Broadspectrum's contract with the Australian government, which was up for renewal on October 31, has been worth an estimated $2.2 billion to the company over five years. The new five-year contract has been reported as being worth around $2.7 billion.’

Yet despite this largesse from we taxpayers, in 2013-14 Transfield could only make a taxable profit of $16 million and pay no income tax. Maybe running concentration camps isn’t that profitable after all? So Transfield/Broadspectrum, what explains the large amount of gross revenue and small profit and no tax?  Or will you keep this as well kept a secret as the secrecy surrounding the locking up asylum seekers?

A few weeks ago, two building union leaders in Victoria – John Setka and Shaun Reardon – were charged with blackmail and face 15 years in jail for the "crime" of targeting Boral, a key supplier to Grocon, a building company the CFMEU have been waging a long battle with over workplace safety. Grocon was fined $250,000 in 2014 for the deaths of three pedestrians who were killed when a wall collapsed at one of its Melbourne sites. 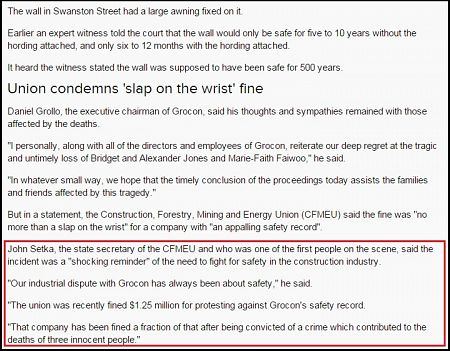 Grocon is a private company so we won’t know about its tax affairs until sometime in the New Year when the ATO collects and verifies the data under new laws passed recently.

Boral however is a public company. It had gross income of over $4 billion, yet its taxable income was only $190 million and the tax it paid on that was $39.5 million — a tax rate of 21%. How is with such large revenues Boral has so little taxable income and pays so little tax.

7-Eleven was in the news recently, with stories about how its franchisees underpaid and overworked employees. The scam of paying workers for only half the hours they work. This cuts the award wage of $24 in half. As for penalty rates, forget it.

The 7-Eleven holding company is a private company so we won’t find out some basic information about its tax affairs until early next year.

However, 7-Eleven in 2010 bought 300 Mobil petrol stations and, in 2014, the arrangement became that Mobil would return as its petrol brand name to the outlets, together with the 7-Eleven stores there.

According to the Corporate Tax Transparency Report, ExxonMobil had revenue of $9.6 billion but had no taxable income and paid no income tax. I think ExxonMobil has some explaining to do to the public. Why so much revenue and no taxable income? Of course, there may well be a perfectly sensible explanation about how a petrol retailer can’t make any money, so let’s hear it. Over to you, ExxonMobil.

Spotless, too, has been in the news lately with accusations of not paying its workers their proper wages. It treats some of its cleaners as contractors rather than employees and pays them a flat $20 an hour rather than the award rates of between $23 and $25 an hour. The big savings are in not paying night rates and weekend rates (including double time on Sundays). Spotless had revenue in 2013-14 of $2.2 billion, but didn’t make a profit and did not pay income tax. Why is that Spotless? How is that Spotless?

Spotless has the cleaning contract with Myer. As detailed in the Tax Transparency Report, Myer had gross revenue of almost $2.8 billion and taxable income of $146 million on which it paid $37 million in tax. Perhaps Myer should explain how with such a large turnover (and low cleaning contract costs) it has such a small taxable income.

News Corp announced in November it was going to axe 55 editorial workers from its newspapers. Its holding company in Australia has gross income of $2.8 billion but no taxable income so it paid no income tax in Australia in 2013/14. Why is that Mr Murdoch?

So far, the hypothesis seems to be standing up well. Companies which underpay their staff or sack them seem also to have an aggressive approach to tax.

Stay tuned for more revelations. Let’s make this a collective effort. Make your suggestions in the comments section.

John Passant is a former assistant commissioner of taxation in the Australian Tax Office. He was in charge of international tax reform in the ATO. You can follow John on Twitter @JohnPassant.

When 579 companies pay $0 tax on $405 billion worth of income, it's time for a royal commission. Retweet if you agree. #taxrort

Corporate tax avoidance- Big business subsidies- All at your expense.. #Auspol #Ausvotes this is beyond words.. pic.twitter.com/69jma6iTbQ