Australia does have a housing market bubble

It’s one of the mostly hotly debated topics surrounding property: do Australia’s high residential prices constitute a bubble? Yes, says Phillip Soos, researcher at Deakin University’s School of International and Political Studies, tackling what he says are the four most popular arguments used by “bubble deniers”. 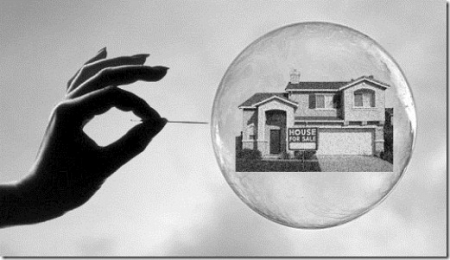 For over half a decade in Australia, a fierce debate has occurred over whether a bubble exists in the housing market. The vast majority of experts, institutions and the public believe that the idea of a bubble is nonsense. On the other side of the coin, a handful of individuals have contested this notion, pointing out the flaws in the bubble deniers’ line of thinking.

We will look over some of the common arguments made by the bubble deniers, to see how they stack up with the facts.

This is often compared to the United States, which is alleged to have non-recourse loans. This line of thinking asserts that borrowers took upon irresponsible amounts of mortgage debt to speculate on housing, knowing that if they defaulted down the track, they would not be liable to pay back the full amount.

This has led to the popular term called “jingle mail,” referring to the notion of a defaulted borrower mailing back the keys to their lender, and walking away from the property. This typically occurs when the borrower is in a position of negative equity, that is, the property is now worth less than the loan. The lender thus makes a loss on their accounts, to the value of the difference between the loan and the current market value of the property.

As the argument goes, non-recourse lending in the US was a major factor in the run-up in housing prices, whereas Australia has recourse mortgages, and thus does not have irresponsible amounts of mortgage debt.

There is one small problem with this view: it is total nonsense.

Ireland experienced a colossal run-up in prices over the last decade, resulting in a crash and subsequent debt-deflation that has ruined the economy. What is not said is that Ireland has recourse mortgages, governed by strict rules, and non-payment may even result in imprisonment. Clearly, recourse mortgages did not prevent a bubble from forming in the housing market.

The idea that recourse mortgages enforce responsible and conservative behavior cannot be upheld. A cursory search through Google on this topic provides information that debunks this notion (like the above study). Yet, this has not stopped the leading “experts” within the RBA, Treasury, the banking and real estate industry, and academia from repeating this falsified argument again and again over the years.

Another popular myth that abounds is that housing prices always go up and never crash. If a bubble denier reluctantly admits that past downturns did occur, it certainly won’t occur this time around.

Australia’s recorded housing price history, going back 131 years to 1880, easily debunks this myth. The nine major increases in prices have been met by eight resulting downturns, with the only exception during a small three year period from 1961-1964, where prices leveled off. The table below, from my Prosper Australia report, shows this.

We are supposed to believe that the largest increase in housing prices in Australian history will not result in the same fate as eight of the nine have.

This is probably the most popular argument used by the bubble deniers. The story is that as Australia is suffering from a chronic deficit of properties to shelter a growing population, so demand is greater than supply, leading to rising housing prices.

The problem with this argument is it can’t explain why prices started to rise in 1996 and skyrocketed from 2001 onwards. Annual population growth between 1996 and 2005 registered at approximately 1%, taking off between 1.5% and 2% from 2006 onwards. (Fundamental supply and demand issues explain rent prices, not housing prices, which is why rents have increased from 2006 onwards).

2007 was the first time since 1950 that the population increased faster than the number of dwellings. If the housing shortage argument was correct, housing prices should’ve started to rise from around 2006-2007 onwards, not 1996. The historical data shows that there is no correlation, let alone causation, between population growth, dwelling supply and housing prices.

According to the 2006 ABS census data, there were 830,376 unoccupied dwellings during the time the survey was taken, out of a total of 8,426,559, or 10% of the dwelling stock. Unfortunately, no indication is given to the status of the vacant properties (derelict, holiday house, undergoing sale, renovations, speculative vacancy).

The Melbourne-based organisation Prosper Australia performed an innovative study of vacant properties using water usage figures. Applying a conservative methodology, it was found that almost 45,000 properties were lying vacant in the areas under study, and extrapolated across Melbourne, 61,000 properties were lying vacant for more than six months. This gives credibility to the idea that speculators are withholding properties from the market to capture capital gains rather than rental income.

Australia’s peak housing body, the National Housing Supply Council, had to include the homeless, caravan park residents, those sleeping rough and couch surfers into their figures in order to arrive at an undersupply of dwellings.

This is reminiscent of every other country affected by a housing bubble whose experts and authorities claimed that rising housing prices were caused by a housing shortage.

This is one of the more ludicrous defenses made by the bubble deniers. Our mortgage debt stands at $1.2 trillion, or 90% of GDP. If personal debt is included as well, as some analyses do, it totals 100% of GDP. A report by the Bank of International Settlements shows that a ratio of and above 85% becomes damaging to the economy.

That Australia has such a high ratio is unsurprising considering the major banks have lent up to 97% of the value of the property (called the loan to value ratio or LVR) and some non-banking lenders have lent out a staggering 125%. The housing debt to disposable income ratio has reached 160%.

Comparatively, Australia has a greater mortgage debt to GDP ratio than the US. Australians have taken upon an enormous debt load to speculate on housing prices. Why bother to work?

Australia is not unique in having a disbelief in the idea of a housing bubble. By definition, a bubble requires that complicity of the majority of people and institutions to believe that there is no bubble. Otherwise, individual rational action would be promptly taken, which would result in bursting the bubble in the early stages or preventing the formation of one altogether.

The only difference between Australia and other countries affected by housing bubbles is that bubble deniers are as plentiful as kangaroos down under.