Why we need s18C: Racism hurts to the bone

The Abbott Government has backed away from watering down racist hate speech laws. Natalie Cromb provides a First Nations' perspective.

ON MONDAY EVENING, at the Garma Festival of Traditional Cultures in Arnhem Land,  ABC Q&A did what many other programs won't: it gave a voice to Indigenous Australians and discussed some heavy issues — the issues of race, identity and racism affecting our people.

I, along with 469,000 others, tuned in to watch an all-Indigenous panel comprising Djawa Yunupingu, Dhäŋggal Gurruwiwi, Joe Morrison, Nova Peris, Noel Pearson and Ken Wyatt.

The panellists received questions affecting the Indigenous community. One of the most powerful was how do we change the mindsets of racist thinkers?

Nova Peris perfectly enunciated what it is like to be on the receiving end of racism:

When she said those words, I felt them and knew them. The overwhelming majority of Indigenous Australians would have felt Nova’s words and been nodding their heads.

Nova shone a light on the fact that racism and racial vilification is not acceptable under any circumstances. She highlighted the bigotry present in our government that set out to repeal Section 18C of the Racial Discrimination Act (RDA), which outlawed racial vilification.

At this point, Liberal MP Ken Wyatt did support Nova’s position and indicated he would cross the floor on this issue to vote against the repeal of this section of the RDA to protect the vulnerable — and not just the Indigenous community, but all those within Australia that feel the racism that is directed towards them.

This illustrated that this issue is not about politics, but decency, respect and equality; concepts that are difficult for Australia given our history and particularly difficult for the Australian Government which seeks to assimilate cultures, rather than embrace difference.

Racism is rife, it is overt (and covert) and it is within all echelons of society. The question is: who will stand up for the vulnerable if there are people as influential as Attorney General George Brandis standing up for the right to be a bigot?

Certainly not Brandis' personally appointed Human Rights Commissioner Tim Wilson, who is a very vocal commentator against s18C. The so-called 'Freedom Commissioner' is of the view that free speech trumps the rights of minority groups to be free from vilification and, consequently, he is an unequivocal supporter of Brandis’ Bill.

The proposed Freedom of Speech (Repeal of s18C) Bill 2014 repeals s18C, along with s18D, which currently provides a 'free speech defence' to s18C offences. Sections 18B and 18E are also repealed.

Section 18C currently renders unlawful any act, other than one done in private, that offends, insults, humiliates or intimidates another on the basis of race if the act is done because of the race of that other or that other’s racial group (subject to s 18D). The proposed amendment would remove the prohibitions on offensive, insulting or humiliating acts.

The provision, which has been part of the RDA since 1995, has become inconvenient to the LNP and LNP supporters due to the findings in Eatock v Bolt [2011] FCA 1103, where the high profile columnist Andrew Bolt was found to be in breach of s 18C, in his publication of two columns in the Herald Sun about lighter skinned Aboriginal people.

In his decision, Bromberg J stated: 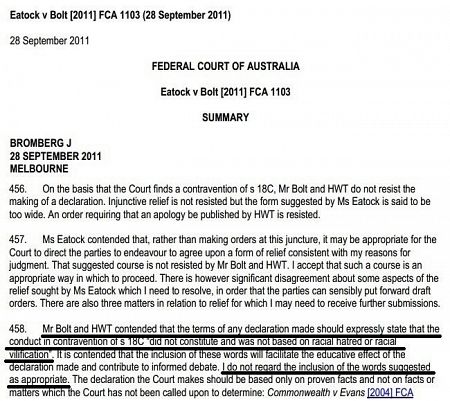 Bolt, in his almost trademarked petulance, shook his head in disagreement throughout the reading of the judgment.

In a brief statement outside the Melbourne court after the judgment, Bolt said:

This is a terrible day for freedom of speech in this country.

It is particularly a restriction on the freedom of all Australians to discuss multiculturalism and how people identify themselves.

I argued then and I argue now that we should not insist on differences between us but focus instead on what unites us as human beings.

Andrew Bolt cannot comprehend that anyone would question his views and consider him racist. Calling an article 'It’s hip to be black' could not possibly be offensive and racist, could it?

The Attorney General, as well as the Human Rights Commissioner, has suggested that it has a “chilling” precedent value regarding the expression of opinions about race.

However, the case has been shamelessly misrepresented by Bolt and others.

Bolt’s views on race have not been silenced. He continues to frequently write about race — especially his disdain for any disparity in treatment for Indigenous people — what Bolt perceives as being preferential. Other likeminded commentators, such as Gary Johns, also continue with their disparaging racial commentaries.

So the scaremongering about free speech is simply that, scare mongering. People are still entitled to free speech but if they write and publish articles that attack people based on their race and attempt to impugn the legitimacy of peoples’ identities with no factual basis whatsoever, the victims of such vitriol are necessarily entitled to the protections of s18C.

#auspol "Take a #TeamAustralia approach": Abbott told Andrew Bolt that 18c repeal is off the table: http://t.co/6wWyE8VuRD via

In any event, it appears Bolt will need to think before he speaks for a while longer with Tony Abbott announcing that he has dumped the proposed Bill to repeal s18C, saying:

Leadership is about preserving national unity on the essentials and that is why I have taken this position.

Notwithstanding what is likely to be disingenuous rhetoric, the result is thats18C lives to protect the vulnerable for another day — for now. Those supporters of the repeal are making their views apparent under the guise of free speech.

It would be facetious for me to state that perhaps Tony Abbott watched the episode of Q&A on Monday night, but I can live in hope that, as there is more awareness and conversation surrounding the problem of racism in this country and the effect racism has on the people of this nation, perhaps some viewpoints will change.

While we are waiting for this shift of consciousness, if you are against racism and wish to make a difference, please support the campaign by Beyond Blue and