SUBSCRIBE   DONATE LOGIN SHOP
SUBSCRIBE   DONATE
How we prevented a Morrison dictatorship
How Howard screwed the Libs
U.S. site tries to ruin what makes fairy bread great
Bloody Idiot of the Week — Episode 28: Get used to it
Morrison's 'politics of retribution'
Indigenous Australia

Hundreds of eminent Australians will tomorrow in Melbourne add their support to Indigenous Elders' calls to end the NT Intervention. 'Is the Federal Government deaf to voices of reason?' asks Jeff McMullen.

WITH OFFICIAL FIGURES now showing that the Northern Territory has the most entrenched poverty in the nation, several hundred eminent Australians across the fields of law, health, academia and the arts are supporting Indigenous Elders calling for an immediate end to the Federal Government’s disastrous Intervention in the remote communities.

A statement to be launched Monday 28 August at Melbourne Law School says:

While the Australian nation deliberates on the future of its relationship with the First Nations of this land, most Aboriginal and Torres Strait Islander peoples are focussed on the continuing discrimination, racism and lack of justice, shown towards them by Federal, State and Territory Governments in so many areas.

An obvious example is the failure of ten years of Federal Government Intervention in the Northern Territory where 73 remote Aboriginal communities (and hundreds more homelands in the hinterlands) remain subjected to discriminatory legislation that no other Australian citizen endures in such crushing totality.

There are many signs of a growing sense of hopelessness in the remote communities as a consequence of oppressive government controls and local disempowerment.

Several outspoken Elders, including Utopia’s Rosalie Kunoth-Monks and speakers from the Yolgnu Nations Assembly will launch the statement of support in Melbourne. They say the slow strangulation of services to the smaller homelands and the suffocating government control of almost all aspects of community life is a creeping extinction for these Aboriginal people.

Deakin University Professor Jon Altman, a long-term analyst of the Northern Territory, who will also speak at the statement’s launch, says the evidence compels him to make an even harsher judgement. Altman claims that ten years of Intervention is accelerating a genocidal destruction of Aboriginal culture and that the work-for-the-dole scheme is as dehumanising as slavery.

Over the past month, I have spoken with many of these fine legal minds and found universal dismay that politicians continue to ignore the voices of Aboriginal leaders, particularly in the Northern Territory.

Prime ministers and Opposition leaders nod their heads when Elders explain their urgent and reasonable proposals to end the unfair treatment and close this space between us. Nothing happens.

From the Tent Embassy in Canberra to Redfern, from Uluru to the Arafura Sea, a stream of politicians sit with Indigenous leaders and pledge to recognise the unique place of Aboriginal and Torres Strait Islander people in the nation. Yet the Government appears deaf to voices of reason. Again, nothing happens.

It is this pervasive silence and refusal to address glaring injustices that have prompted one of the strongest outcries of support for the Northern Territory Elders by many of the most eloquent voices in the field of human rights.

Three separate meetings of NT Elders this year (see statements HERE, HERE AND HERE) have called for an end to the Intervention policies, an apology from past and present prime ministers for the damage done, an end to government control of community living areas, and a return to community control of housing, employment and local governance.

It’s an indication of how serious the social situation is becoming in the Northern Territory that so many who have witnessed this are speaking up against the Government’s failed approach.

Several of Australia’s leading historians on the obliteration of Indigenous life, including Henry Reynolds, Colin Tatz and John Maynard, also were eager to support the call for an abandonment of the relentless attempt to assimilate people in the remote communities through radical social-engineering. 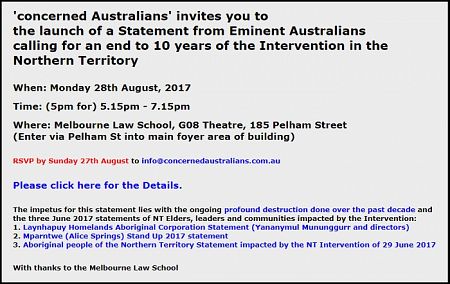 Read the full statement and the names of the signatories HERE. Find out more at concernedaustralians.com.au.

Read more by journalist, author and activist Jeff McMullen AM at jeffmcmullen.com.au.