The road to the 1999 referendum 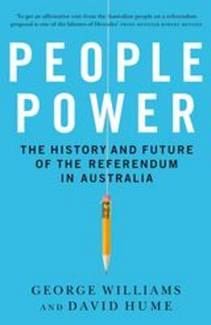 George Williams is a Professor and David Hume a Centre Associate at the University of New South Wales. This is an extract from their book People Power: The History and Future of the Referendum in Australia, published by UNSW Press.

AUSTRALIAN republicanism is older than the nation itself. In 1887, Henry Lawson published his verse, Song of the Republic, calling for an Australia free of the English Crown. Soon afterwards, a monthly called The Republican was launched, backed by members of the Republican Club.

Australia was almost 100 years old before the republic question was put to a vote of the people. The 1999 Republic referendum was unprecedented in its size, cost and the way it captured the nation’s attention. Not even the Melbourne Cup in the week before the vote and Australia’s participation in the final of the Rugby World Cup in the early hours of the morning after the vote could turn the attention of politicians, the press and the people themselves from the referendum.

The story of the referendum began eight years before the vote, in April 1991, at the Constitutional Centenary Conference in Sydney. This Conference led to the formation of the Australian Republican Movement (ARM) in July of that year. Its first chair was prolific author Thomas Keneally. He was joined by a wealth of businesspeople, professionals and politicians. The ARM had clear goals: to sever Australia’s formal link to the English Crown and to replace the monarch with an Australian head of state. The formation of the ARM led to a conservative reaction, and on 4 June 1992, Australians for Constitutional Monarchy (ACM) was formed as a political counterbalance. Two senior lawyers, Lloyd Waddy and Michael Kirby, later justices of the Family Court and High Court respectively, were its first leaders.

In April 1993, Prime Minister Paul Keating established a Republic Advisory Committee. Its remit was to advise on options for Australia to become a republic. Keating appointed a prominent member of the ARM, Malcolm Turnbull, as chair of the Committee. Turnbull was, in many respects, an inspired choice. A member of the Sydney establishment, he had studied law at Sydney University before being awarded the 1978 Rhodes Scholarship for New South Wales. By 1993, Turnbull had already had a successful career as a barrister and investment banker. According to journalist Paul Kelly, writing in 1999, Turnbull was ‘a tall poppy, clever, successful, rich, ruthless and impatient’. Turnbull brought these traits, and his own money, to prosecuting the 1999 referendum.

When the dust had settled, Turnbull estimated that he had spent almost $3 million on the referendum and was responsible for 80 per cent of the ARM’s budget.

The Republic Advisory Committee knew that referendums were doomed without bipartisan support and it knew that getting the support of the Coalition for a cause that had been an aspiration of the labour movement from before Federation would be difficult. The Committee, therefore, locked in, as its first priority, to develop a compromise model capable of appealing to conservative republicans. The model that resulted from this spirit of compromise came to be called the minimalist republican model. It proposed that the Queen and Governor-General be replaced by a President who would exercise the same powers, and be appointed and dismissed in a similar manner to the Governor-General.

This approach, centred on political compromise, had two significant effects on the referendum campaign that was to come. First, it led to a campaign that was, by and large, conducted across party lines. The campaign even saw Prime Minister John Howard openly and vigorously debating with his Treasurer, Peter Costello, and both Howard and Costello doing the same with a senior government Minister, Peter Reith. This meant that, regardless of the outcome, the referendum would challenge accepted positions on the role that party support plays in Australian referendums. Secondly, it led to a campaign that was, from the beginning, designed to achieve consensus among the political classes rather than being driven by those who would make the ultimate decision, the people of Australia. The absence of popular ownership and the failure to persuade the community of the need for the referendum and of the appropriateness of the minimalist model proved ultimately to be terminal flaws of the failed 1999 poll.

In 1995, Keating adopted an Australian republic as a core plank of the platform he would take to the 1996 election. In November 1994, the then leader of the Opposition, Alexander Downer, had mooted the idea of a people’s convention to discuss the republic. When John Howard became leader in 1995, he was forced, contrary to his monarchist beliefs, to adopt as part of his platform the holding of a convention on the republic. After Howard was elected in the 1996 election, this promise became government policy. The result was the Constitutional Convention of 1998.

The Convention’s composition was unprecedented in modern Australian constitutional reform. Half of the delegates were popularly elected by a voluntary poll in November 1997 (turnout was 45.3 per cent). The other half were appointed by the government, in consultation with other groups. When the delegates assumed their positions in February 1998, they were broadly divided into three groups: monarchists (who supported the status quo), minimalists (who supported variants of the Republic Advisory Committee model) and direct electionists, who later assumed the name ‘Real Republicans’ (who wanted a President directly elected by the people). The composition of the Convention meant that, barring extraordinary circumstances, a version of the minimalist model would be its recommendation. This it duly was, in the form of a republic in which a President would exercise the same powers as the current Queen and Governor-General and be appointed by a two-thirds vote of the federal Parliament.

The critical question – whether the Convention should recommend the minimalist model – achieved 73 votes in favour, less than an absolute majority of the convention; but was opposed by only 57 votes (there were 22 abstentions). This was seen as a sufficient level of support to be called a majority outcome and Howard committed to holding a referendum late in 1999.
REPUBLIC AUSTRALIAN HISTORY 1998 constitutional convention 1999 referendum George Williams John Howard Malcolm Turnbull Paul Keating Peter Costello Referendums
Recent articles by