In a grim reminder of how the Australian music industry works, a contrite Owen Campbell gained redemption from three B grade celebrities on Australia’s Got Talent last night, says Benjamin Thomas Jones. 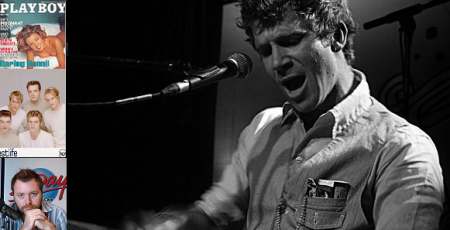 Owen Campbell returned to the stage of Australia’s Got Talent, won the judges heart and won himself a place in the next round. The real winner, however, was Channel 7 which has masterfully manipulated what was little more than a confrontation between a no-nonsense busker and precious B-grade celebrities into a feel-good story with weeks of potential yet. It is hard to know whether to feel joyful or resentful after Campbell’s second audition. On a personal level, it is wonderful that an extremely talented singer and songwriter has been given the chance to receive national exposure and is a potential winner of AGT’s lucrative grand prize. On a more contemplative level, it is a grim reminder of how the music industry works. The heads of the major labels sit happily at the top of the pyramid, the radio chiefs and concert promoters are below, next are the record chains, the managers of local venues and finally, the indentured servants who prop up the entire industry, the musicians themselves sit pathetically at the very bottom.

The response to my article on Campbell’s first audition was completely unexpected. Within hours the article had received thousands of views, shares and retweets. What seems to have struck a nerve more than anything was the lack of fairness in the judging. It seemed such a miscarriage of justice to have an extremely talented artist rejected from a talent show for not pandering to the fragile ego of B-grade celebrities. As a blues artist, slide guitarist and songwriter, it was painful to see Campbell berated so severely by representatives of the plastic pop world.

The second audition began with Campbell offering a humble apology for his behaviour. Just as he sharply interrupted him speaking in the first audition, Brian McFadden again cut Campbell off. Assuring him he had a fresh start, McFadden got to the heart of the issue quickly noting, ‘If you hadn’t of talked last time and just performed you wouldn’t be here right now, so just perform’. Campbell did just that. Although he sang well, the guitaring was less impressive and the overall performance lacked the sparkle of his opening audition. The crowd clapped along but did not jump to their feet as they had done last time. McFadden, however, did jump to his feet, clearly applauding, not the performance, but the new deferential and subservient attitude begin displayed.

Channel 7 have in place all the ingredients for the perfect redemption story. The ‘controversy’ created interest, the prodigal son has now returned and may even complete the fairy tale by going on to win the show. McFadden, despite being the main antagonists last week, had nothing but praise for Campbell following his second performance. Dannii Minogue was terse but positive. Kyle Sandilands could not help but remind Campbell of the key to success in the music industry. He is a genuine contender to win AGT because, ‘you’ve now learned to keep the attitude under control’. The message could not be clearer. Never mind the audience, the performance or the songs, schmooze the industry gate-keepers and you’re halfway to fame.

So what can we make of all this? Why are musicians at the bottom of the music industry, obnoxious B-grade celebrities in the middle and faceless moneymen at the top? Campbell, for his part, has done what any sane person would do. He is a street busker being offered $250 000 and a record contract if he plays ball. It was inevitable that he would return in sackcloth and repent before a boy band singer, playboy stripper and shock jock. If the blame lies anywhere it is with all of us for failing to support the arts and thinking that sitting at home watching television somehow constitutes caring about music.

Owen Campbell has played countless times at Canberra’s Phoenix pub and other small venues, yet he has gained a bigger audience in 5 minutes than the previous 5 years of non-stop gigging. How many people take an interest in local Australian music, turn up at the small pubs to see live performances and call the radio stations to ask for local bands? How many go that step further and fork out $20 to buy a new artist’s first album. For most new artists, the first album is a labour of love, usually costing them thousands from their own pocket. It means the world to them when someone buys it but so often they leave the near empty pub with as many albums as they came with. When it comes to music, Australians seem to be vehemently against giving people a fair-go.

The reason live music in Australia is in such bad shape is simply because we are not getting out and giving new local artists a chance. Why is it that our radio and music television shows are inundated with a virtual replica of the United States Billboard chart? It’s because we are not supporting out local music scene. Sydney, in particular, is guilty of effectively killing off live music due to apathy. The music stage in countless pubs has been replaced by pokies. Musicians are increasingly giving up on their original material and resigning themselves to playing well-worn covers to a crowd which has decided it has lost its patience for new material unless it comes endorsed by a major radio station and preferably hot off the charts in the US.

If we want to have a thriving local music industry, where talented Australian artists are celebrated and allowed to be successful, then we need to start supporting the local scene. We need to check out the local indie press, find the quality local bands writing original music, buy their albums and give them a chance to compete with foreign music. If we do that, then the Owen Campbells all over the nation will have a chance to be heard and to approach the record labels as successful, valuable assets. If we don’t, then we doom our artists to live in a country where stroking the ego of B-grade celebrities is the best path to getting noticed. If only to wipe the smug look of self-righteousness off the face the AGT judging panel, let’s start supporting Aussie artists.

You can read more of Benjamin Thomas Jones’ writing at his Thematic Musings blog.