Reconciliation requires that we recognise the past, in all its glory and shame, at the same time as we build for the future, says Stephen Keim SC in a speech made last week, during Reconciliation Week.

MAY I ACKNOWLEDGE the traditional owners of the land on which we meet and honour the elders, past and present. May I further acknowledge that this land was never ceded.

Thank you for your invitation to speak to you, this morning.

As well as the opportunity to mark National Reconciliation Week (from 27 May to 3 June) and to celebrate Brisbane’s and, particularly, QUT’s Indigenous Community, this morning provides me with an opportunity to reflect upon my knowledge (or lack thereof) of reconciliation issues and my attitudes picked up along the years.

The Australian Government website has a page devoted to Reconciliation.

The next paragraph goes on to say that the reconciliation movement is said to have begun with the 1967 referendum, in which 90 per cent of Australians voted to remove clauses in the Australian Constitution which discriminated against Indigenous Australians.

The page provides a description of some excellent moments in the history of struggle for Indigenous rights including civil rights campaigns in the decade leading up to the referendum and the walk off the job by Indigenous workers at Wave Hill station in the Northern Territory as part of the campaign for equal wages.

The Council for Aboriginal Reconciliation, itself, was created by act of Parliament in 1991 and charged with a mission:

The idea of reconciliation

The idea about reconciliation that you get from the Australian Government website is that reconciliation is about being friends: unity and respect between Indigenous and non-Indigenous Australians; respect for heritage; and valuing justice and equity for all.

There is very little sense of history in the concept.

The Reconciliation Australia website tells a similar tale. Its website starts by saying that reconciliation is about building better relationships between the wider Australian community and Aboriginal and Torres Strait Islander peoples for the benefit of all Australians. 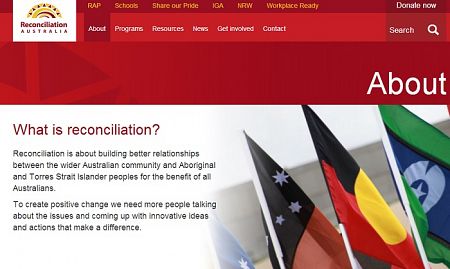 There is nothing wrong with that approach. But waking to a reconciled, just and equitable Australia seems just a little easy when it comes to great historical changes.

We can get an idea of the historical meaning of reconciliation by a simple Wikipedia search.

I put the word in my search engine. I went to Wikipedia. I skipped over the entry that related to accounting. There are two entries under the heading “History”. The first is “Truth and Reconciliation Commission”. The second is a very long German word: 'Vergangenheitsbewaltigung'.

Going to the first, I found that a truth and reconciliation commission is a commission tasked with discovering and revealing past wrongdoing in the hope of resolving conflict left over from the past. The reports of such a commission can provide proof against historical revisionism of past state terrorism.

Interestingly, the first such commission was Argentina’s National Commission on the Disappearance of Persons created by President Raul Alfonsin on 15 December 1983.

I learnt that Vergangenheitsbewaltigung is a composite German word that describes processes of dealing with the past by wrestling it into submission. It is a key term in the study of post-1945 German literature and culture.

Vergangenheitsbewaltigung describes the attempt to analyse, digest and learn to live with the past — in particular, the Holocaust, so that we are not, by forgetting it, condemned to relive it.

The term is said to deal with the concrete responsibility of the German State and individual Germans for what took place under Hitler and to find roots of legitimacy in a society whose devotion to the Enlightenment disappeared in the face of Nazi ideology.

"Vergangenheitsbewaltigung" is a German word for a "struggling to come to terms with the past."

I am not intending to criticise the concept of Reconciliation as revealed by the two websites. I am not trying to denigrate the good constructive work that Reconciliation Australia does or the excellent people who serve on the board and as its employees and volunteers.

But our Reconciliation is a long way from Vergangenheitsbewaltigung.

We have had some episodes of Vergangenheitsbewaltigung. Most notably, in recent times, the Bringing Them Home report of the Human Rights and Equal Opportunity Commission was an attempt to wrestle with an aspect of the past and to find a way for all of us to live with it.

There have been many others who have looked for the truth of the past so that it could be brought into the light of day so that we could learn from it; honour those aspects which deserve to be honoured and move on to build a future that will not involve reliving the shameful parts of that same past.

But, equally, there have been others who have protested against a “black arm band view of history” and have sought to turn us back to the Great Silence, as WH Stanner called it in his “After the Dreaming” Boyer lectures of 1968.

It seems to me that we need the constructive, positive happy aspects of Reconciliation.

Reconciliation requires that we recognise the past, in all its glory and shame, at the same time as we build for the future.

The Bar Association and Reconciliation

It just so happens that, after many years of avoiding any involvement in the politics of the bar, last year and this year, I have been elected to the Council of the Bar Association of Queensland.

And that places me in a good position to talk about the Bar’s contribution to Reconciliation.

In 2007, the Association hosted the National Indigenous Legal Conference. This brought together Indigenous students and lawyers from across Australia to examine topics critical to their studies and practice of the law.

In 2009, the Association established the Mullenjaiwakka Trust to honour the work and example of Mullenjaiwakka, formerly known as Lloyd McDermott, the first Indigenous Australian to be admitted as a barrister.

The purpose of the Trust is to provide financial assistance to Indigenous students and lawyers so that they can progress to and remain at the Queensland Bar.

In 2011, the Association established the Indigenous Students Mentoring Scheme, which pairs Indigenous students with a pair of mentors: one from the judges and one from the Bar.

In 2013, the Association established its Indigenous Barristers Committee to improve access to justice for Indigenous people generally and to assist and encourage Indigenous students and lawyers to make that brave step into the abyss of becoming a barrister. The Committee, along with Ken Barlow, Dan O’Gorman and John Fraser, contains those two eminent and skilled barristers, Nathan Jarro and Josh Creamer, both of whom have an Indigenous heritage.

One of the major early achievements of the Committee has been to develop the Association’s Innovate Reconciliation Action Plan 2014-2016. In April 2014, the Council of the Association voted unanimously to adopt the Action Plan. The Action Plan was launched at the Banco Court in the New Courts Building on 29 May 2014.

The Action Plan, which commenced on 29 May 2014 and will continue until 31 May 2016, recognises the unique position that Aboriginal and Torres Strait Islander People have in Australian society as Traditional Custodians of land, knowledge and law. The Association also understands that Australia’s First Peoples continue to encounter social and economic disadvantage within the Australian community.

In launching the Action Plan, the then President of the Association, Peter Davis QC, said that the suffering experienced and suffered by Australia’s First Peoples has led to severe disadvantage in areas including health, education and employment.

Mr Davis said that the Association recognised that it had an important role in achieving reconciliation. He hoped that the Action Plan would assist in that regard and would contribute to increasing the number of First Australians practising at the Queensland Bar.

The Action Plan recorded that, as at this time last year, there were 11 Indigenous barristers practising on their own account and three working in paid positions.

I hope that, from among those attending this morning’s breakfast, those numbers will be increased over the coming months and years.

Many people have contributed during my lifetime to that process both under its current rubric, under other names and, sometimes, without worrying about a name.

It would be most wrong of me to say that anybody’s reconciliation efforts should be funnelled down a particular path.

On the other hand, do not let others tell us what we think is important about the past history of this country. And, if some of us think that knowing our history is important and useful to reconciling ourselves and our peoples, then we will learn and proclaim that history.

I, for one, will acknowledge the days of sadness in Australia’s history, along with celebrating those great victories at Lords or the Gabba. I still think that knowing about the dark days of dispossession and bloodshed is important. I will protest against the return of any New Great Silence.

This piece came from notes for a speech given by Stephen Keim SC to the QUT Law Society Reconciliation Breakfast at the Hilton Hotel, Brisbane, 7am, Tuesday, 2 June 2015. You can follow Stephen on Twitter @StephenKeim1.

Australia is racist and unsurprisingly - nobody likes to hear it - except for the people who can see it! #auspol https://t.co/dorjArvgQL