The mainstream media is filled with non-events like the current royal tour and other celebrity "news" to sell us things we don't need and fill our minds with pointless trivia, writes managing editor David Donovan.

William, Kate and the little one started their Australian tour today in Sydney, in case you've been living in a cave. The media, especially Channel Nine – the most unabashedly sycophantic of all the Australian networks – are jammed full of royal watchers and royal "news".

Let's be quite clear, the obsession with royalty is simply symptomatic of our society's unhealthy obsession with fame, celebrity and royalty. I am a republican, but whether we were a republic or not, the TV stations, newspapers and women's mags media would still blow it's Andrew over a tour by Will and Kate — we can see that from royal visits to the U.S. and Germany.

The royals are merely uber-celebrities. Some of the most famous people in the world. Ones that every person recognises and knows. And these particular ones have only a possible, contingent , peripheral role in our democracy — one being second in line for a figurehead role as our future head of state, that is.

It might be unfashionable to say this during a royal tour but, like most Australians, I am not the slightest bit interested in the private lives of celebrities, the well connected, the rich, the regal or the unaccountably famous.

I couldn't care less what they do, where they go, who they see or what they say. I wouldn't look out the window if I was told a celebrity was in my street, let alone go downstairs to get a closer look. They are just people I don't know. Well, apart from the few I do happen to know.

But what's more interesting is that I strongly suspect I am in the majority, rather than the minority who couldn't care less about celebrity — royal or not.

The importance of celebrity is, I am convinced, vastly overrated by the mainstream media.

Most people aren’t interested, but you can’t get away from it because the media offers celebrity “news” constantly on every station until you can’t help but become conversant in the private goings on of these people — unless you find some way to expunge your brain from meaningless trivia. It is literally jammed down your throat at every opportunity, even though it has next to no intrinsic news value at all.

The truth is, celebrity news is actually a con-job to extract money from our wallets and to keep us from thinking about what is actually important.

It's the old pea and thimble trick — don't look at that, look at this!

I have met my fair share of celebrities over the years — actors, actresses, sports people, writers, musicians, politicians and so on.

None of them – not one – stand out as being as anything especially out of the ordinary or to particularly to be admired. Just ordinary people doing their stuff. To be honest, they were no more interesting to me than the people you would bump into on a Thursday night at your local Woolworths. An individual becoming self-obsessed and conceited – as many have almost no choice but to be become, with the spotlight so often upon them – generally leads to less interesting conversation — unless you are as fascinated with them they are with themselves, which I never am.

It’s true that some, though by no means all, celebrities have a skill that gets them noticed by the media. They might be able to sing, dance, swim, run or paint well, for example. But if you went down to the Woolies crowd, you would find that each one of them had a special gift as well.

Almost everyone does something exceptionally well.

In short, celebrities are just ordinary people put in extraordinary situations by the media. And most of the meaningless BS you read about them is downright fiction written by their PR people or unethical opportunistic hacks.

This tour by William Windsor, Kate Middleton and a small baby, if that's possible, is even less interesting. They aren't even remotely interesting people. Some might say that it is important because he is an heir to our throne. But by the time his turn comes around – in, say, 30 years – we are more than likely going to be a republic.

Has anyone ever heard William or his wife say anything remotely interesting?

In fact, the media is positively denied the opportunity to hold unstaged, unscripted, interviews with William. The Palace obviously don't trust him to stay on message. Maybe he is not especially bright?

Certainly, William always reminds me of a Harry Enfield depiction of a British toff — 'Tim Nice But Dim':

But who really cares? The only interesting thing about royalty, and aristocracy in general, is that they have a long and colourful family tree and are generally rich beyond the imaginings of most ordinary people. As an egalitarian, I do not regard those as notable or admirable traits.

And I believe most people feel the same way.

Many will watch the tour because their curiosity has been piqued. A lot will tune in because there won’t be much else on, since it will probably be screened on four of the main free-to-air channels. Most people will probably switch channels and find something more meaningful to watch — such as the cartoons.

What a lot of hype for nothing.

The Australian media contingent covering this royal tour will be immense.

What a despicable waste of resources when there are important and interesting events happening all over the globe that should be covered in preference to this. How many crew are in the Ukraine? How many will be analysing the next budget? What is Channel Nine’s commitment to bringing us credible information about global warming? Running investigations into organised crime and Government corruption? Nowhere near the number covering the royal tour, you can be certain of that.

Of course, the powers that be – the big corporations, the political parties and the media – want us to be disengaged from what is really happening, and that's another reason they continually, breathlessly serve up these circus sideshows.

For the mass media, they want us to be interested in celebrity so we keep watching their TV shows and movies, to keep buying their cheap supermarket magazines and whatever merchandise they have the celebrities selling or product placing this week. For the media, promoting celebrity is largely a self-interested commercial decision.

For the political parties – represented by politicians and big corporations – they want to maintain the comfortable status quo that keeps them in power and to keep us ignorant about the activities they would prefer us not to know about.

To paraphrase the words of John Howard — they want us to feel “relaxed and comfortable”.

Or, in other words, brain-dead and compliant.

Only by us turning our attention away from what they are doing behind our backs, and focusing it onto something trivial – like sport, celebrity news, reality TV, competitive cooking shows, royal tours – can they work behind the scenes at removing our democratic rights and freedoms, entrenching their power and feathering their nests and those of their cronies.

They're stealing our wallets while we stare zombie-like at Funniest Home Videos — or a royal tour.

It’s the old two card trick. We're being conned. Most of us know it on some level, just that too few of us care. At this stage.

But the thought of all the journalists and crew covering this meaningless celebrity tour at the exclusion of all the other vital domestic and world events, is an insult to all of us.

Luckily most people are not stupid. Now we have alternative media and a savvy new generation that are more in tune and in touch with what is really going on. We can see by events like March in March that the mainstream media are having more trouble than ever in dictating what we should be interested in.

A generation that won’t accept the bland and unappealing TV dinners we have been force-fed for 50 years.

Until then, they will give us royal tours.

David Donovan is a former vice chair of the Australian Republican Movement. You can follow him on Twitter @davrosz. 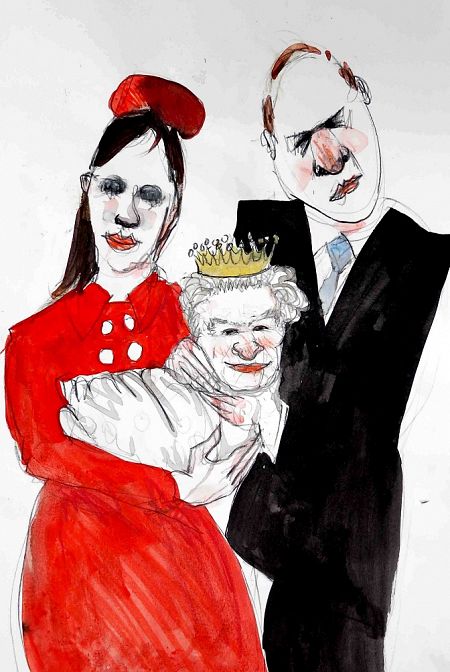