It seems Scott Morrison has kidnapped three children on the high seas and handed them to the same junta who killed two of their uncles, writes Bob Ellis.

It looks like Scott Morrison has kidnapped on the high seas three children, who were on their way to New Zealand, and delivered them into the hands of a junta who had killed two of their uncles and imprisoned a third — or so it is alleged by Jason Koutsoukis in a two-page article in the Sydney Morning Herald yesterday.

These acts of piracy, kidnap and child abuse are known — but other children may have similarly suffered, and may already be dead, like Morrison’s other victims Reza Berati and the two young men who burned themselves to death in fear of what he might do to them.

What he has done, in this case, is what the Americans call ‘rendition’ of children and at least one woman who have done no harm to Australia, and weren’t even coming here, back to a nation so infamous that Canada wouldn’t send its representatives to a conference it was chairing in protest against its ‘human rights abuses’ — that is, the torture and killing thousands of its citizens in the wake of a vicious civil war.

Scott Morrison, who will be speaking in tongues today and seems unable to join the dots from some of the violent, illegal acts against children and women he has ordered, is called this act of what may become assisted murder an ‘on-water matter’ he may not speak of while the High Court is deliberating it — a High Court that would if he were, say, a pirate, without a ministerial position and 150 spin-doctors, put him in gaol.

Other people on the boat – Hemantha Kuruppa and Janaka Gayan Athukorala – who may be murdered soon, and some of their families – Morrison would not let go to New Zealand, and sent back into the ambit of thieves, hit-men and crooked police. Another, Mahinda Indika, had refused to assassinate his employer, a top-ranking policeman and was sent back by Morrison, also to his likely death.

If this is untrue, Fairfax will be sued by Morrison very soon. That no hint of this has occurred indicates it may be true — and raises another question.

How many other women and children has he sent back into harm’s way already? How many of them are dead?

It is an unusual situation.

It is like the ‘rendition’ of escapees from Saddam Hussein into torture in Abu Ghraib by Americans on the order of Maliki. It is, if Malcolm Fraser is right, like putting Jewish escapees on the train to Auschwitz after they had reached, like the Von Trapp family, Switzerland and been kidnapped there by Röhm’s SS.

More evidence will come in relating to this new boatload, mainly of Tamils, circling in the Arafura Sea, and it is desirable the captured women and children be brought before the Court in Canberra to testify. And it would be puzzling if they were not.

In normal circumstances, the Minister would be arrested for attempted rendition, piracy, kidnap or child abuse — or all of the above.

Why is Morrison doing this?

Well, he said he could stop the boats. And the boats kept coming. So he captured the people on them and sold them off – as you would a cargo of slaves – to the genocidal Sri Lankan Government, who had plans for them and gave these water-thugs boats of their own to retrieve other fugitive idealists.

He thus kept up his score sheet – "no successful arrivals" – while refusing to say how many kidnapped children he had sent by this means into persecution, torture, poverty or death.

While refusing to say anything at all.

By doing this, he became acclaimed as ‘Abbott’s most successful Minister’ and his likely heir. 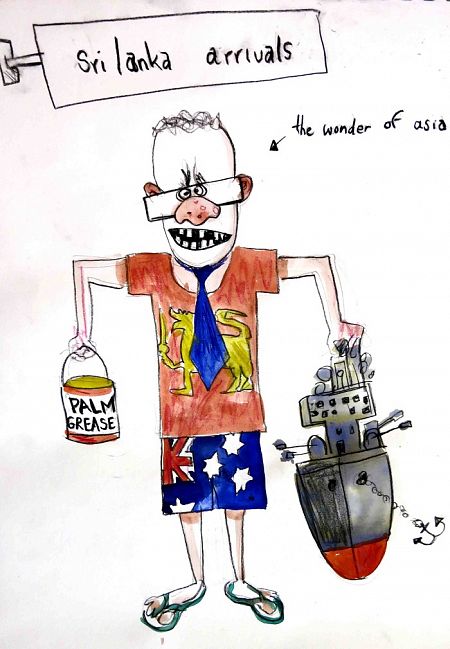