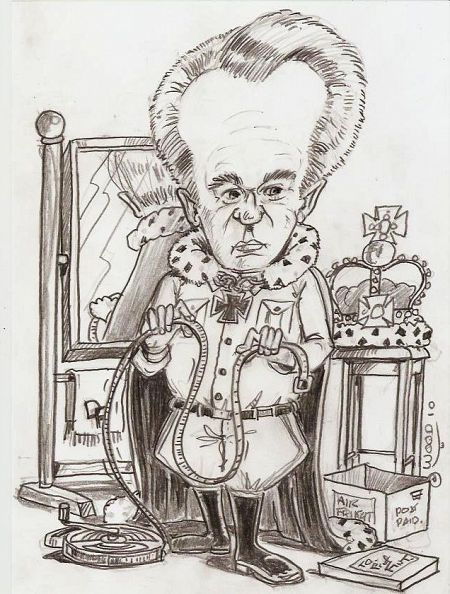 David Flint is in full flight again — this time he’s predicting those two journals of record The Age and The Sydney Morning Herald have announced their death knell because they advocate a republic.

I can never quite get my head around the blatant political behaviour of the Professor, particularly as he goes to great pains to say that his personal web site – which isn’t available for comment except for “registered users” – does not take a political stand on anything.

That, of course, is pure David Flint crapola.

He goes into raptures whenever the egregious Alan Jones – a political animal if ever there was one – even comments on the weather. His great friend can do no wrong.

“…gone out of their way to annoy their traditional readers by adopting the agenda of inner-city republican elites to which the editors obviously belong”.

I’m not sure if the Indonesian born professor understands the concept of press freedom. He should — he was head of the Press Council for 10 years and then chair of the Broadcasting Authority for a while (before being forced to resign in scandalous circumstances).

But what I am sure of is that in his country of birth newspapers are very wary about what they report and what they don’t.

Flint must know that in his adopted country newspapers are well within their rights to write what they like — just as his heroes Alan Jones, Piers Ackerman and Andrew Bolt can rant and rave their right wing views whenever they like. In Flint’s book that’s OK, of course.

He says the “elite’s agenda” and the editors of those two journals say the “Australian crown” is doomed and that a republic is inevitable.

What is this guy talking about?

The crown in question is worn not by an Australian, but by an octogenarian ethnic German who has visited this country on just sixteen occasions in her sixty-year reign.

Now the Queen has been remarkable — but her relevance to Australia is questionable.

She is an absent head of state.

The notion that in the 21st Century a country like ours should tolerate a system where by accident of birth we have to – under the terms  of an out-dated constitution – accept a descendant of the queen’s whether we like it or not and that descendant also needs to also a descendant of the long dead Electress Sophia of Hanover, needs to be Protestant and needs to be born of parents who are married is just absurd.

It is a ridiculous and insulting situation, which any adult country must reject — and this is where the editors of the two newspapers aroused the ire of David Flint.

Whether Flint likes it or, there are many “elite” Australians who want the monarchy retained and just as many who do not.

He insults those who do by tagging them with labels denigrating them.

David Flint clings to straws. His latest outrage came about by a statement from an outfit called CCZ Equities, which predicts the demise of both the Sydney and Melbourne broadsheets.

Flint is wary about criticising Rupert Murdoch, an avowed republican, as was the mogul’s late father, Sir Keith Murdoch.

He is also dismissive of calls for the abandoning of a Queen’s birthday holiday in Australia —neglecting to mention that the poms don’t celebrate the day with a holiday, or indeed at all, with the exception of the birthday ‘Trooping the Colour’.

Just how embarrassing it must be when our missions overseas are closed on the birthday of a woman who is not even an Australian.

In a final dig, the owner of Australians for Constitutional Monarchy hisses thus:

“It will be very sad to lose the print versions of our great journals of record.

“But to a significant degree, both had already abdicated that role years ago when they decided to run with the agenda of the inner city republican elites.”

On just what planet does David Flint inhabit?