The Victorian Government has forced Zoos Victoria to end a campaign encouraging visitors to use toilet paper made from recycled products. Tess Lawrence reports. 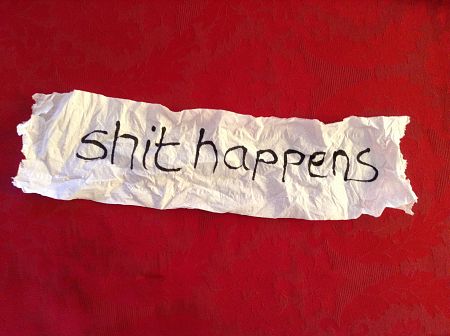 He is Agricultural Minister for what laughingly passes as a Government in Victoria.

And he has just given Victoria's zoos the bum's rush on the very successful 'Crapman' campaign that encouraged zoo visitors to consider toilet paper used from recycled paper and products endorsed by the Forest Stewardship Council, rather than wood from those forests where culling has an adverse impact on animals and their habitat.

This ridiculous edict comes from a man who won an Environment Centenary Medal in 2002!

Then again, he did once order a multi-thousand dollar investigation into the sightings of 'big cats' in Victoria, to prove they didn't exist. Money well misspent. Sightings persist.

It's a pity that Minister Walsh doesn't apply the same diligence in expunging vile and cruel puppy farms. These pitiful creatures, are bred, breed, fall and die under his portfolio.

If only Minister Walsh had the political courage to rid this state forever of the annual duck killfest. Instead, Minister Walsh has capitulated to the burgeoning gun lobby and has now extended the kill season to 12 weeks. These birds needlessly die under his portfolio.

Then there are the caged battery chicken and egg farms, where neither comes first; wretched lives and deaths. And we put all that misery into our bodies.

And also the illegal slaughterings of livestock.

Little wonder then, that Minister Walsh has failed to show any leadership in this latest matter.

He should back our zoos and commend their magnificent work in encouraging us to use recyled and FSC loo paper. He should be putting their names forward for awards — especially given he's also masquerading as the Minister for Water.

As deputy leader of the Nationals, he is a floating turd away from Leader Peter Ryan and Premier Ted Ballieu — should the latter fall off his towering ego or the storeys high pile of rejected FOI requests.

Our zoos have a built-in mandate into the complex and vexed issue of enclosing wildlife ‒ to at least educate young and old ‒ including our dunderhead politicians, about our individual and collective responsibility to sustain and repair our bleeding and choking Beloved Planet.

There is an urgent need to protect those remaining creatures we have not yet managed to make extinct through greed, apathy and mismanagement — just for starters.

Zoos belong to the animals and the people, and not to political parties and their corporate gamekeepers, party donors, vested interests and political mates and backscratchers, and other such invertebrates.

What is more, many of the successful breeding programs in our zoos are part of international teamwork programs to build up threatened species, providing a last minute reprieve in some cases.

In yesterday's The Age, Tom Arup informs us that:

Well, fancy that! At long last, official confirmation that telling the truth is contrary to government policy.

Arup sums up the Walsh fracas:


But the campaign, which included a roaming superhero, Crapman (''Saving wildlife one toilet at a time''), fell foul of the Baillieu government's timber industry action plan, released in December 2011. Under the plan, the government says it will not fund or endorse any organisation that does not also equally recognise an alternative timber certification scheme - the Australian Forestry Standard.

Most conservationist groups believe the stewardship council's certification standards are more rigorous. The Australian Forestry Standard is supported broadly by the timber industry.

The operations of the state-owned timber company VicForests have obtained certification from the Australian Forestry Standard, but not the Forest Stewardship Council.

The highly successful 'Wipe for Wildlife' campaign is one of six major community conservation campaigns, that includes 'Wash for Wildlife', promoting the use of phosphate-free laundry/cleaning products; and 'Don't Palm Us Off, to drive the introduction of Palm Oil labelling to enable customer choice, given that its production is threatening the destruction of the Orang-Utan habitat and thus its very survival.

In 2011, Zoos Victoria won the Zoo Aquarium Association's inaugural Innovation Award for their fantastic Wipe for Wildlife campaign and reported that 91 per cent of visitors to Healesville Sanctuary recalled the campaign's message. The Age reports that the Australian chapter of the FSC have nominated Zoos Victoria for a local award for this campaign, but that the intervention of the department had caused the nomination to be withdrawn.

The 'Don't Palm Us Off' by Zoos Victoria has also won an award: the 2011 Banksia Environmental Foundation People’s Choice Award.

These are the outrageous, vile, wicked, subversive, anarchic words that so offend Mr Walsh and his Timber Teddy Boys [and a warning, these words are unfit to be read by anyone under 42 years of age and who is a member of, or an associate of, or supporter of The Australian Forestry Standard]:

Millions of trees are flushed down Australian toilets each year, so we can wipe our bums and bits. Zoos Victoria's Wipe for Wildlife campaign encourages the community to help save local wildlife by making the switch to recycled toilet paper.

All forests have ecological value. They provide habitat for wildlife, protect soil from erosion, clean our air and absorb carbon which tackles climate change. Healthy forests help maintain healthy ecosystems which are essential for the survival of our local wildlife.

Zoos Victoria makes helping local wildlife easy by suggesting toilet paper products which not only help protect forests, but give the consumer a guilt-free bum!

Wipe for Wildlife encourages the public to switch to 100% recycled toilet paper, made from post-consumer recycled content. We suggest locally made products that don’t contain harsh chemicals as the best choice for the environment. 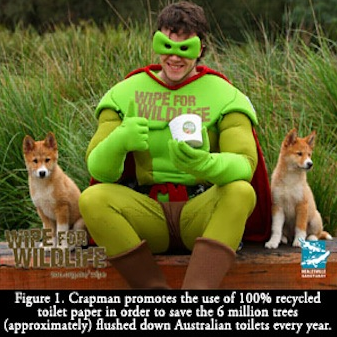 Under the picture of our pumped up three-ply (hope he's not on steroids) recycled paper hero, Crapman, the dear naïve caption writer for The Age has written [IA emphasis]:


The unfortunately-named 'Crapman', the face of Healesville Zoo's Wipe for Wildlife campaign.

Crapman is most certainly not 'unfortunately-named' since I believe he is nobly named for Thomas Crapper who invented the ballcock and manufactured and sold other lavatorial equipment and inventions — thereby continuing to save countless millions of lives from death and disease.

However, it seems that Minister Walsh and his mates are breaking the very law they accuse Zoos Victoria of violating.

Par example, this is what I've found under his blog about the timber industry. I can't find the author's name, but ‒ surprise, surprise ‒ it's not very flattering about environmentalists.


Letter to the Editor:

Timber harvesting is often attacked by fringe environmental groups and grossly misrepresented as an industry that is wiping out our native forests, with no regard for sustainability. This is simply not true.

Ninety-nine per cent of forestry coupes regenerated by VicForests satisfied the performance standards.

These reports show that Victorians can be confident in the integrity of our commercial forestry industry, and that Victorian forests are being managed sustainably and according to regulation.
Victoria’s native timber industry provides important economic support to many of our regional towns and employs around 11,000 Victorians.

The timber from our native forests is sourced sustainably and responsibly, ensuring our forests remain renewable assets.

The Victorian Coalition Government proudly supports the State’s commercial timber industry, and these latest reports again confirm our forests are among the best and most sustainably managed in the world.

And then, shivver me timbers, if I don't come across a press release written only last week:

Not only does the MP for Swan Hill, Peter Walsh, break Government rules in promoting, favouring, endorsing certain products/organisations over others — but so does National Leader and Deputy Premier, Peter Ryan.

Deputy Premier and Member for Gippsland South Peter Ryan urged those in the market for a new home cooling system, or other appliances, to take advantage of the Victorian Coalition Government’s Smarter Choice Retail Program.

Mr Ryan said the Smarter Choice Retail Program trains retail sales staff to provide customers with advice on the energy efficiency of appliances and how to get the best out of the model they choose.

“By choosing the most energy efficient appliances available and using them properly, Victorians can minimise their energy consumption and save money on household bills,” Mr Ryan said.

“Families can save up to 25 per cent on their running costs by choosing a more energy efficient air conditioner using the star ratings on the Energy Rating Labels.

“Research shows that a significant number of shoppers make up their minds about purchases when they are in the store.

“As part of the program, customers can also access in-store brochures outlining running costs of appliances, energy and water efficiency tips and easy to use calculators showing the greenhouse gas and water savings made by choosing higher efficiency products,” Mr Ryan said.

For more information and a list of the Smarter Choice retail stores visit www.sustainability.vic.gov.au/www/html/3407-smarter-choice.

The Baillieu Government is doing everything possible to ensure it will not be voted in for a second term.

In zoo parlance, Walsh and Ryan and the Baillieu Government are  'hippocrits.' No insult to hippos, either. I mean as in — big time.

And come election feeding time, it is highly likely that the people will spit the dunny.