Sydney hosts an IQ2 debate today, Tuesday 24 June, where former Foreign Minister Bob Carr and Indigenous academic and activist Marcia Langton will argue for a republic, and that the Queen should be the last Australian monarch, while award-winning journalist for The Times David Aaronovitch and lawyer Julian Leeser will speak for the status quo.

Her Majesty Queen Elizabeth II is widely admired and respected amongst the Australian people, whom she has served as Monarch since 1952.

In time, however, it is inevitable that the queen will die. Providing Australia does not become a republic beforehand, the new king will automatically include amongst his realm the land and people of Australia.

There are many who believe that it would be mistaken to confuse personal affection for the Sovereign with abiding support for the monarchy. Indeed, there are still many who urge that no self-respecting nation should have a foreign head of state. Others respond by noting that there is little point in altering Constitutional arrangements that have well served the nation for over a century. As the Queen enters the latter years of her reign, however, many Australians feel that her successor should not ascend to the Australian throne.

Whatever one might think of the attractions of constitutional monarchy, the death of the Queen should prompt deep reflection amongst Australians about the prospect of retaining a foreign head of state. Hopefully, such questioning will not be seen as a lack of respect for the service rendered by the Queen or for her person. Rather, it should be understood as natural that such questioning arises in a democratic polity where the people (and not the monarch) are sovereign.

Of course, many will worry that no better alternative can be found. But surely that is a matter to be debated rather than merely asserted. And that can only be done if Australians imagine a future beyond the death of the Queen.

Some might say that it would be imprudent and unfeeling to debate such matters at the time of the Queen’s death. This may be true — which is why it is far better to discuss the options now, when judgment is unclouded by sentiment.

The IQ2 event will be held at 6.45pm at the City Recital Hall, Angel Place, Sydney. For more details and tickets, click here. 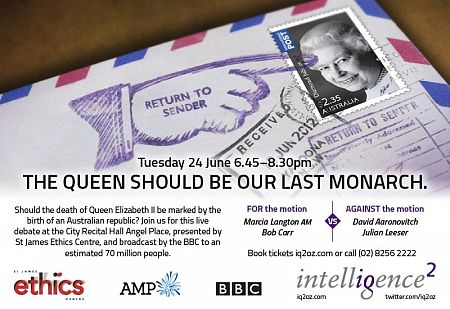