Australians are in denial about their racism. Indigenous Australian Natalie Cromb speaks out about a lifetime on the receiving end and her hope for the future.

A phrase so often used. A phrase I have heard countless times in my life and each and every time I hear it, I cringe because I know what is coming next:

Racism is a major problem in this country; it is not in clusters, it is not confined to the rural areas of the nation, and it is not a way of thinking reserved for the older generations.

Racism is an ailment* that affects old and young; it thrives in the ignorant, it is contagious among the weak willed who would rather go with the flow of community sentiment then to go against the flow and seek to be educated on the issues.

I have experienced racism my whole life and, despite my rich cultural heritage, of which I am abundantly proud, each and every time I experience racism, it hurts. It hurts not only because my identity is being attacked or belittled, but that of my ancestors is being attacked and belittled.

I have heard varying remarks of the same theme:

“But you look white.”

"You wrote this? I thought you said you’re Aboriginal.”

"Don’t worry, nobody will be able to tell.”

I have been introduced at parties as

And been told I am

I have been asked:

"What percentage of Aboriginal are you?”

The trouble is, the people asking the questions and making the comments were so ignorant, my hurt was not apparent to them and, on the occasions I could get over the hurt and say something, I was not met with apologies and understanding.

I was met with:

"It wasn’t directed at you personally, so what’s your problem?”

The expectation from a significant portion of people I have come into contact with is that I must be, or ought to be, ashamed of my Indigenous heritage and identity. On the contrary, I am very proud of where I have come from and who I am. I am a descendant of Mary Jane Cain who was one of the very first land rights activists — though she didn't know it at the time.

She was a protector of her people, the Gamileraay people of Coonabarabran, and petitioned the Crown, and was awarded a small parcel of land which established the Burra Bee Dee Aboriginal Reserve and the Aboriginal people were able to be safe and live on this land. She was revered by her people and referred to fondly as 'Queenie Cain'. She was a strong and proud woman, and existed in a culture where women were not less than men, they had different but equal roles and she was respected by men and women alike, and successfully worked within the confines of the new and foreign British laws to ensure the safe habitation of her people. Mary Jane Cain died at Burra Bee Dee on 29 July 1929, but she lives on in the hearts, minds and souls of her descendants.

So, ashamed of my identity and culture? Not at all.

Indigenous people inhabited this land for thousands of years. Indigenous people considered themselves caretakers of this land and only took what was necessary for their survival, ensured the flora and fauna flourished by ensuring the ecological sustainability of the environment by migrating their hunting locations, conducting restrained and strategic back burning and keeping the earth pristine, until they were called home to The Dreaming (afterlife).

The land, to Aboriginal people, was identity, responsibility and respect. White settlement (please note that Indigenous people do not consider this land to have been settled, but rather forcefully invaded, but this is a discussion for another day) occurred 226 years ago and in the last 226 years the land has been brutalised and pillaged almost as much as the Indigenous people who, until only 47 years ago, were considered flora and fauna!

Indigenous people were scientifically examined and, apparently, considered just slightly more intelligent than primates, thus justifying the constitutional categorisation, and the powers of the time set out to “breed out” this race with the removal of all children born of European parentage. It is from this sinister political policy of "assimilation" that the concept of percentage of Aboriginality was born — a policy of genocide.

So the ancient culture that, in the simplest of terms, was about love and respect for the environment and one another is the subject of derision, of utter contempt. This culture and those who identify (there are many that don’t purely because to do so invites prejudice and ridicule) are treated less than their non-Indigenous counterparts.

Considering this history and the contemporary presence of racial stereotyping, I query what is wrong with Australians — specifically?

In the United States, a similar situation occurred with Native Americans sustaining displacement and violence, but at least the Native American people were afforded treaties with the ‘settlers’. The Maori people of New Zealand were similarly afforded the Treaty of Waitangi. The African Americans enslaved in America were the focal point of the American Civil War, started in the interests of equal rights. America also had a very strong civil rights movement that peaked in the 1960s and brought significant changes to the lives of millions of African Americans. 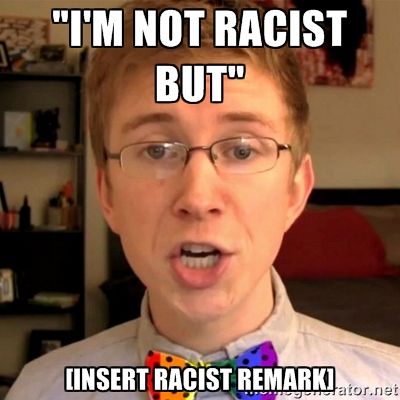 This is not Australia’s experience.

In Australia, the Indigenous people were murdered, massacred, raped, attacked violently, enslaved, imprisoned without having committed a crime, beaten whilst imprisoned and the subject of attempted genocide.

Their land was taken and their identities and cultural practices outlawed and ridiculed.

There was no treaty, no reparation, no compensation and no real acknowledgement on a national scale (until The Apology of Prime Minister Kevin Rudd) of the atrocities that occurred and the violence and racist political policies continue to oppress the Indigenous people of this nation.

There have been Royal Commissions into the treatment of Indigenous people, but recommendations are not adopted and there are no meaningful attempts at reparation.

In fact, the then Prime Minister Kevin Rudd specifically stated in his apologia:

"Let me be clear, there will be no compensation."

When Indigenous people speak up against the atrocities of the past they are told to not take a "black armband view of history" and to “get over it, it’s in the past”.

It is with the knowledge of the above history that I am utterly perplexed as to why Indigenous people continue to experience racism. Why is it okay in the minds of some people? In what sense does it benefit the perpetrator?

Why is this national problem of racism not common knowledge? I mean, listen to talk back radio and read the Daily Telegraph and you will hear and see a whole lot of reassurance that it is the minority or lefties with the issues, not the majority.

Let’s be clear, the white is the majority, so of course the majority doesn’t have the problem!

Why do we celebrate Adam Goodes' sporting achievements on the field and award him ‘Australian of the Year’ — but if he uses this platform to raise issues of inherent racism, he is booed when he runs onto the field, attacked on social media and belittled elsewhere (apart from on IA, of course).

What is wrong with wanting true and genuine equality for Indigenous people?

What is wrong with standing up for what is right?

Why are those brave enough to stand up and be heard treated with such vitriolic backlash?

Because this country has a problem and this problem is racism.

It is a hate that is learnt in the home and propagated by the mainstream media. It is a problem that the majority prefer to ignore or deny and the minority that speak out against it, experience hatred magnified. Because nobody wants their dirty secrets on display. It’s better to pretend they don’t exist, or better yet — let’s blame it on the victims by labelling them the “problem”, as former NSW Liberal opposition leader Peter Coleman did so eloquently.

Like all social problems, there is no quick fix, but rather there needs to be an awakening of social conscience and a collective desire to take responsibility for change.

I love this country and I love the land and environment. I love the people and the diversity. I love the opportunities afforded us in a globalised world in the information age. However, I find the continued racism and stereotyping alive in this nation positively soul destroying.

We are smarter than this, surely?

We can do better than this.

We should expect more of ourselves and of our friends and family. Speak up when you hear racist comments; speak out and be proud to be loud!

Racism, it stops with you and me, and us.

* By ailment, I mean an illness of the closed mind variety, because I am by nature an optimist. I refuse to believe that those with racist attitudes would maintain those views if they were properly educated in an objective manner with an open mind. So for the purposes of this post, let’s consider them ill, because the alternative is far too sinister and I simply cannot contemplate hate of that magnitude in a world that my beautiful daughter not only exists but needs to flourish.