Fourth in line to Australian throne - a right royal galah

By Barry Everingham | 26 July 2011, 12:00am | comments |
Australia is already lumbered with an hereditary head of state as well as her heirs, one of whom may take over someday. Barry Everingham takes a look at the Queen's second son, Andrew — what he finds is on the nose. 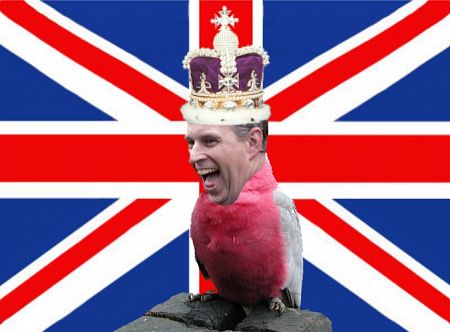 The humiliation we have to constitutionally bear by not having an Australian as our head of state, our first citizen is, in the 21st Century, a disgrace.

We belong to cabal of sixteen other nations who really must be the laughing stock of the civilized world for continuing to tolerate this aberration — but tolerate it we do.

Considering  the scatter-gun world we live in, it is not beyond the realms of possibility that – God forbid – Prince Charles, a childless Prince William or  his brother Harry were unfortunate enough to get in the way of some crazed terrorists bomb, our situation as a nation would be nothing short of laughable.

And why is this?

Our next in line is the Queen’s second son, Prince Andrew, the Duke of York.

Now the monarchists reading will start to bristle — accusing this esteemed site of royal bashing, of taking over from the disgraceful and disgraced News of the World.

I am indebted to the international best-selling, prize-winning magazine Vanity Fair for alerting its readership of what is found when the real Andrew emerges from intense scrutiny.

If Australia’s constitutional situation happened to be normal and not the unhinged out-of-date nonsense it is, I for one wouldn’t give a hoot in hell about Britain’s royal family and the idiotic behaviour they go on with.

However, as that dysfunctional, out of touch,  ethnic German, collection of misfits happen to provide us with our first citizens, I – hopefully like all loyal  Australians – want to know what we can expect when things change following the death of EIIR.

While on the subject of mammals with large ears, [he had been referring to another piece in the edition about elephants] we turn to Prince Andrew, the Queen of England’s prodigal son and serial problem. He put a damper on the royal wedding this spring after the British press learned in February that he had been a little too familiar with a young American woman named Virginia Roberts, who claimed to have been tutored (while an under-age girl) to serve as a prostitute by Andrew’s close friend Jeffrey Epstein, the New York based financier and convicted sex offender.

Now, the faint-hearted might now want to move on, but I believe it is in the interest of all Australians to know exactly what kind of man their possible inherited head of state is.

Graydon Carter is prefacing the excellent essay ‘The Trouble with Andrew’ by Edward Klein, this month’s Vanity Fair cover story.

This year, London’s The Mail on Sunday, dropped a bombshell.

The paper had interviewed Virginia Roberts, who claimed Epstein had had flown her to London in 2001 – when she was just 17 – for the express purpose of spending time with Andrew.

Why Roberts, a mother of three who now lives in Australia, waited all those years to tell her story isn’t clear but what is obvious is that it’s really another nail in Andrew’s coffin.


Andrew is his mother’s favourite son – she and Charles have little in common and her youngest child, Edward, has always had the royal family confused – he has never really “conformed”, whatever that means in that unfathomable family.

In the face of almost universal criticism of Andrew, the Queen, as usual, put her head in the sand and to protect him, invested him with one of her own honours: Knight Grand Cross of the Royal Victorian Order!

As Mr Carter points out — under-age consorts of Jeffrey Epstein are not bound by suck royal decrees.

So what do know about the myriad of allegations surrounding the 4th in line to the British throne and – God help us – the man who is just four deaths away from being our own foreign head of state?

He hosted a lunch at Buckingham Palace for Mohammed Sakher El Materi, the son in law of the deposed Tunisian strongman, Zine El Abidine Ben Ali.

Then he accepted a $30,000 gold necklace for daughter Beatrice from a convicted Libyan gun smuggler.

As an aside, it’s thought in royal circles that when and if Charles gets the throne, both Beatrice and Eugenie will lose their “royal highness” status, saving the hapless British taxpayer thousands of pounds annually for their bodyguards.

“Air Miles Andy” as he is affectionately known in RAF circles, got a kick in the arse for taking a helicopter just fifty miles to attend a lunch with Arab  visitors: $5,000.

There’s a beauty which illustrates his recklessness.

He flew to Sharm el Sheikh with a businessman who provided Fergie, his former wife, the Duchess of York with $66,000 to help pay her staggering debts.

Vanity Fair needs to be congratulated for exposing the foibles of “Randy Andy”.

It is a monthly magazine published by Conde Nast, USA.