A group of Vietnamese asylum seekers, including 12 children, have tried to reach Australia by boat for the second time, writes Shira Sebban.

I HAD BEGGED THEM never to try to reach Australia by boat from Vietnam again. Through an interpreter, I had warned them about our country’s tough border protection policies and we had made it clear that any money raised was to be used to feed, clothe and educate their children in Vietnam.

They had agreed, sending messages of gratitude, or photos of their children with their new school supplies, each time we transferred a few hundred dollars from the online crowd funds launched last year.

So when they embarked on their second attempt to seek asylum in Australia, they did not tell us.

All we knew was that they had disappeared from Facebook and were no longer answering their phones. Concerned, we asked their lawyer, Don An Vo, to find out what happened.

Imagine our shock to read his announcement that three failed asylum seeker families, including 12 children, had fled Vietnam again and were heading for Australia.

As it turns out, they never made it here. Ten days into their journey, the engine failed, their boat hitting rocks and beginning to sink. Rescued off the Java coast by Indonesian authorities, they have since been interviewed by the UNHCR and are applying for refugee status in Indonesia.

Tran Thi Thanh Loan and her four children made headlines last year when she lost her appeal against a three-year jail sentence imposed by the Vietnamese government for helping organise an “illegal departure” to Australia in the family-owned fishing boat in March 2015. Her children, aged 4-16, were set to be forced to leave school and live in an orphanage, their father, Ho Trung Loi, having already received a two-year sentence. He is not due for release until April 2017, although that now appears out of the question.

The Vietnamese authorities have said “he will never be released unless we return,” Loan said from the Indonesian motel where she and her children are staying.

"At first they told him we died at sea because the boat sank. He nearly went crazy with grief. Then they put him in solitary confinement, refusing to let my sister visit or send him food or medicine. She had to bribe them to see him and only managed to say we are safe before the police took him away. They told the family he will be punished for ‘my mistake’ and so we believe he may be beaten."

Loi has since been moved to a harsher prison in the Vietnamese jungle, where he is forced to do hard labour and is not given enough to eat, Loan alleged.

She accused the Vietnamese police of “terrorising” her extended family, preventing them from operating their fruit stall:

“I’m worried the police will destroy their only source of income as pay-back and to ensure they have no money to help me and provide for my husband.”

Pressure had been mounting on Loan in the weeks leading up to her decision to flee. Also among the group of 18 asylum seekers is mother-of-three, Tran Thi Lua, who last year too lost her appeal against a 30-month jail sentence for helping organise another “illegal” departure to Australia in July 2015.

While the two women had been granted a temporary reprieve, they were both facing imminent, lengthy sentences.

“They asked what would happen if they went back to Australia,” Doan Viet Trung, president of Vietnamese human rights organisation, VOICE Australia, said. 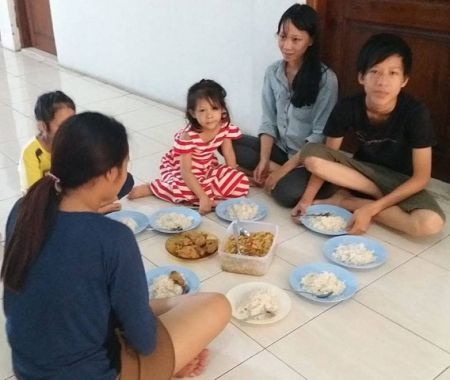 The children in Indonesia (Image supplied)

"I told them they'd be sent back or detained indefinitely. Lately they expressed fears that when in jail they'll be beaten badly for speaking out, officials have threatened them so. I told them they should record the threats to show their fears are grounded. Lua told me she had recorded  something."

Both women had also told their lawyer Vo they would rather commit suicide by jumping into the sea than be jailed in Vietnam. Lua had already spent ten weeks in prison in 2015, before being charged, which had traumatised her, describing being beaten and sworn at by female guards, who forced prisoners to drink, wash and cook with filthy water.

The Vietnamese court has now revoked its deferral of the two women’s jail terms, so if they are returned, they will go straight to prison.

Since mid-2016, I have been in regular contact with both women, having started online crowd funds to help their families, who were among 113 Vietnamese asylum seekers intercepted in three incidents by the Australian Navy over the past two years. Assessed at sea and found not to warrant protection, they were forcibly returned after the Australian Government received written assurance from its Vietnamese counterpart that returnees would not be punished. Several members of the three groups have since been incarcerated.

What will happen to the 12 children caught up in this saga? At worst, they will be returned to Vietnam, where their mothers risk longer prison sentences as repeat offenders under the Vietnamese penal code. At best, they could be detained in legal limbo in Indonesia, unable to work or study.

An apparently hopeless choice made by increasingly desperate parents in the face of Australian intransigence, with fewer options now available to asylum seekers in what certainly seems to be a harsher world.

Tran was detained for 3 months, beaten & sentenced to 3 years in jail after Dutton sent her back to Vietnam. Awful. https://t.co/y7b8FxaTFh

Assaulted by Hells Angels in Villawood: Asylum seeker speaks out

16 March 2017, 3:30pm A group of Vietnamese asylum seekers, including 12 children, have tried to reach ...
Join the conversation
comments powered by Disqus
News updates