SUBSCRIBE   DONATE LOGIN SHOP
SUBSCRIBE   DONATE
How we prevented a Morrison dictatorship
How Howard screwed the Libs
U.S. site tries to ruin what makes fairy bread great
Bloody Idiot of the Week — Episode 28: Get used to it
Morrison's 'politics of retribution'
Australian history

If you're unsure whether plebiscites could inflame national debate, just look at the conscription votes of 1916 and 1917, writes history editor Dr Glenn Davies.

AUSTRALIA'S FIRST PLEBISCITE occurred on 28 October 1916. Exactly 100 years later, the Australian Federal Government is again considering using the plebiscite as a political process to decide the way forward — this time on marriage equality. If there is any question on the potential a plebiscite can have for inflaming a divisive national debate then one only needs to look at the conscription votes of 1916 and 1917.

Conscription means the call up or enlistment of recruits for compulsory military training. In 1911, the Australian Government introduced compulsory military training for all males between the ages of 12 and 26. The 12 to 18-year-olds had to join cadet units, while the older age groups were trained as soldiers. There was widespread resistance and between 1911 and 1914 there were over 27,000 prosecutions for non-enrolment, and over 5,000 young men were imprisoned. Despite this, there were 45,000 men conscripted for home service by 1914. It was the intention that they only be used for home defence in time of war.

In the first year after war was declared in August 1914 there was a rush of enthusiastic Australian volunteers. However, when the posting of the dead at Gallipoli went up all around the country these attitudes changed quickly. The number of volunteers dropped sharply as the war showed no signs of ending. Australians’ enthusiastic responses to recruitment had decreased as they learned more about battlefront conditions and the high rates of Australian casualties in France.

But by mid-1916, recruiting campaigns were no longer convincing enough men to enlist. Voluntary enlistment in the AIF was less than half of the 16,500 men per month who were needed to maintain Australia’s fighting capacity. The Australian Government became increasingly concerned about the impact of large casualty figures from the Western Front and falling enlistment numbers. Nearly 30,000 Australians had been wounded at Fromelles and Pozieres alone. However, at the same time, enlistment was running at just over 6,500 per month.

In 1916, Prime Minister of Australia William Morris "Billy" Hughes made a visit to Britain and France and saw for himself the high casualties of war. The British High Command convinced him that Australia must increase its participation in the war effort. An immediate Australian force of 115,000 men was needed, with an additional 16,500 per month. When Labor Prime Minister Billy Hughes decided that Australia should follow Britain’s example by introducing conscription, divisions in Australian society became very bitter.

Only a year earlier, Hughes himself had declared:

“In no circumstances would I agree to send men out of this country to fight against their will.”

Of all the armies fighting in World War I, only the Australian Imperial Force was formed entirely from volunteers. The Defence Act (1903) gave the Australian Government the power to conscript men for military service inside Australia but not for service overseas.

Prime Minister Hughes’ solution was to appeal over the heads of Parliament and call for a referendum which, if successful, would amend the Constitution to allow conscription for military service outside Australia. Hughes’s tactic was to pressure Parliament (and his party) to agree to conscription by gaining public approval for the idea in a national referendum. Hughes hoped to gain sufficient "yes" votes to pressure the Labor-dominated Parliament to change its mind.

In 1916 and 1917, Billy Hughes fought hard to convince Australians to vote "yes" in the conscription referenda he introduced. He announced the first referendum with the words:

“I am going to work for this referendum and its success as if it were the only thing for which I live."

Hughes’ determination provoked a debate that bitterly divided the nation and forced Australians to consider where their primary loyalty lay. 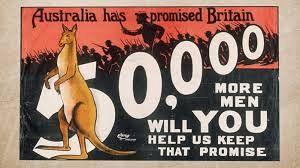 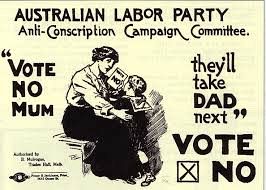 Prime Minister Hughes was supported by most in the higher levels of Australia society – the leaders of the major churches, veterans’ groups, business leaders and the largest newspapers. The issue was also supported by the Liberal/Nationalist Party opposition. In addition, groups such as the Universal Service League were formed to encourage support for conscription. Conscription was viewed by these groups as being their patriotic duty and as a way of supporting the men who were already fighting.

Despite being a Labor Prime Minister, Hughes’ main opponents on conscription came from the Australian Labor Party and the trade unions. These groups faced significant hurdles as they could not match the array of high-profile leaders of society lined up in favour and the government was prepared to use the War Precautions Act to arrest prominent anti-conscriptionists (‘Anti’s’) and to confiscate their materials. The Anti’s had a variety of reasons for their stand - two key ones being hostility to the idea of forced military service and a religious objection to war.

Hughes threw himself into the conscription campaign and was confident that the referendum would pass. However, a new presence in the campaign was felt when the Catholic Assistant Archbishop of Melbourne Dr Daniel Mannix made public comments about the issue.

Mannix was in tune with his working class congregation when he said:

At that stage, Mannix’s comments were not seen to be fatal to the conscriptionist cause and the Australian Government started to plan for conscription before the vote was even taken. For example, in many regional areas, Exemption Courts began sitting to hear the arguments of men who did not want to be conscripted.

On 28 October 1916, Australian voters responded to the question:

The results of the 1916 conscription plebiscite by state

The results of the 1916 referendum were a great shock to both sides of the argument. The overall count was close, but Section 128 of the Constitution requires a majority of voters in a majority of states to accept a proposal for it to be successful. Under these rules, the referendum had clearly failed.

Following the failure of the conscription campaign, the Labor Party passed a vote of no-confidence in Billy Hughes as its leader. Hughes and 24 of his supporters left the Labor Party and joined with the opposition Liberal Party to form the Nationalist Party. Hughes and the Nationalists had a resounding victory at the May 1917 Federal election and Hughes decided to try a second referendum on conscription in December 1917. It also was defeated.

The conscription debates of 1916-1917 reflected the division of loyalties that had emerged in Australia since the late 19th Century, and especially since Federation in 1901. On the one hand, Australians felt a loyalty to their own young nation and a desire to shape its destiny. At the same time, most still felt the "crimson thread of kinship" — the strong links to Britain that could be seen in the desire to re-create British culture in a land on the other side of the world.

And yet, the decision not to force young Australians to fight for the "old country" on the other side of the world was surely a sign of independence for our young nation.

I guess it is in the DNA of Australians that we like to do things only if it is of our choosing. We are a loyal people who value our tendency towards the levelling of society. 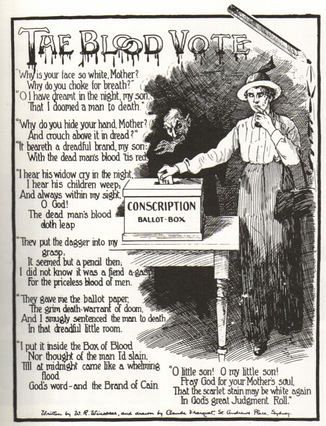 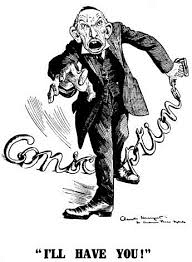 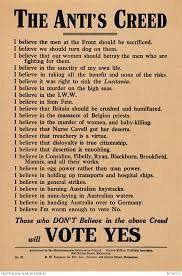 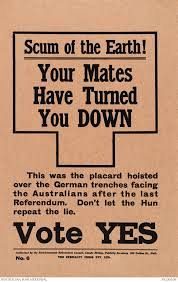