For those who enjoy celebrating Australia Day on the day that marks Indigenous dispossession, Indigenous affairs editor Natalie Cromb says: enjoy your day, but know change is coming.

Notwithstanding Senator James McGrath’s eloquent and sympathetic response to calls to #ChangetheDate of Australia Day (read: Invasion Day), I am going to have to disagree with his verbose stance despite how loathe I am to take an alternate stance to such an intellectual.

Note Senator @JamesMcGrathLNP clever response to calls to change the date of Australia Day.
If only his mum had told his dad the same thing. pic.twitter.com/wz8SyF5qMT

I would like to #ChangetheDate — but not right now.

I am in solidarity with all of the mob who are calling for the Government to change the date and am in support of their joint initiatives, where non-Indigenous allies also joining the cause. Unfortunately, however it is too soon; this country is not mature enough and would not enact the substantive change needed for this to make any material difference in the lives of our grandparents, uncles, aunties, brothers, sisters and cousins.

To change the date now would be an act of symbolism.

I am a vocal advocate of progressing this nation and relations with Indigenous people through Treaty. Treaty is the line in the sand where Australia can mature as a nation, and dispense with the denial that continues to dog relations and move towards a better future — one where there is a clear acknowledgement that Indigenous people are strong, smart and resilient.

A Treaty would be the basis upon which the sovereign Indigenous people of Australia and the Government could negotiate the terms of rights to land, minerals and resources and the self-governing of communities. It would be a binding agreement that would have sanctions that would deter breaches of the terms of the treaty.

Treaty is essential because, 229 years after colonisation, we remain at the bottom of the socioeconomic pyramid. Even after 229 years, children are still being removed arbitrarily from Indigenous families, racism remains rife in society and none more so against Indigenous people. Even after 229 years, Indigenous people are still dying in custody and being subjected to cruel punishments, including water being switched off, communities being closed and being forced into work programs that provide less than the minimum wage. And, moreover, we still have to justify why January 26 is so damn upsetting to us.

Put simply, it is the day that life as it was known was destroyed. It represents the end of the Aboriginal harmonious co-existence with the land. It represents the onslaught of disease, massacres, murders, rapes, slavery and attempted genocide of our people.

January 26 is the date where we are told, more than ever, to "get over it" and move on. Because Australia is a "great country" and we should be grateful that we are here. But, sorry, we can’t get over it and to move on means things are better now, when they’re not — despite what the stupefying mainstream media tries to tell you.

Australia – January 26 – the land where we celebrate with nationalistic buffoonery with complete disregard to the Indigenous Australians mourning. Even worse, it is the land where such mourning is not only an inconvenience but is downright offensive to the true blue Aussies who have made this "the lucky country."

White Australia doesn’t want to hear about "history" and they’re "sick of the guilt", I am told frequently. Well it is not just history — it continues. And if White Australia is sick of the guilt, White Australia needs to step up to effect change that ceases this continuation of them advancing at the expense of all others – especially the Indigenous people whose blood remains on the hands of white man and in the soil we walk upon. 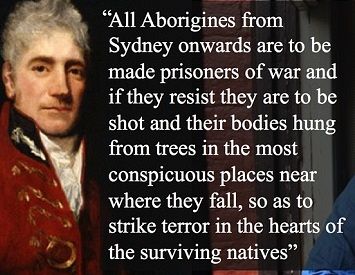 Changing the date before we have a substantive Treaty document to hold the government to account and empower Indigenous people with control of their communities, law and justice and the future will silence us, and silence the reasons we abhor this date.

So, to those advocates for Australia Day and how it “includes us all and allows us to celebrate what a great country we live in”, enjoy your day, celebrate the Australia you think is the "lucky country".

Enjoy your ignorance, but know that change is coming — Black Australia is mobilising and a growing number of allies who are not Indigenous walk beside us. Do you want to be comfortably ignorant, or would you like to be on the right side of history?

Be on the right side of history. Subscribe for just $5.

3Novices: First Nations women speak out about Treaty at Redfern (Friday 21/3/15) http://t.co/3tLEdSy9j6 Natalie Cromb, along with other …