The ACTU is working with the Business Council and Australian Industry Group to grow Australia's population by the size of Canberra of every year? Michael Bayliss comments.

THE Council of Trade Unions (ACTU), the Australian Industry Group (AIG) and a number of peak trade bodies have joined forces with the Business Council of Australia (BCA) to inform the Australian public that they want business as usual. That is, for Australia's population to continue to grow by the size of a new Canberra every three years.

The Guardian has provided a concise summary of the union position in the context of current migration dynamics in Australia. It is evident that key union bodies would prefer Australia’s skilled migration program to continue indefinitely at 190,000 per annum. The skilled migration program continues at the expense of the humanitarian program, which at 16,250 in the past year pales significantly in comparison.

A National Compact on Permanent Migration as been signed by a number of organisations, including the ACTU, to present ten principles on why the current migration policy should continue unchanged.

The first principle can be viewed as an ideological statement that underpins the rest of their arguments:

'We affirm that Australia’s permanent migration program is essential to Australian society and economy and do not support any reduction to the scheme.' 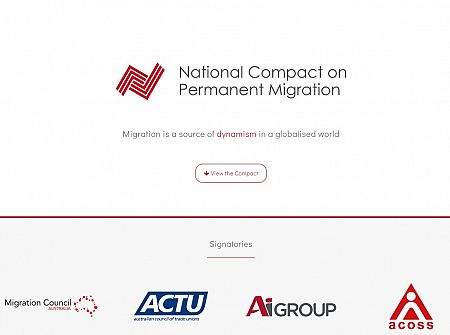 Click on image to view Compact (Image screenshot via nationalmigrationcompact.org.au)

The impression gained from this principle is that the economic rationale is so essential and unquestionable that it is inflexible to any counter argument. This includes any caution around any negative impacts of population growth of other principles in the Compact that includes for example,  ‘strong social systems’, ‘educations and training’ and ‘genuine skills shortages’.

It is important we are aware that the economic assumption that population growth is a vital prerequisite for economic growth is just that — an assumption. It is one that has been debunked many times. Journalist Mike Seccombe has done so recently in the Saturday Paper, comparing Australia to Japan, where population is beginning to decline. Conventional economics would have us believe that Japan would be a "basket case", if gross domestic product (GDP) is the measure by which we adjudge economic success.

However, economist David Pilling found that a different reality in Japan, including low unemployment, high quality social services and health care sector, and a rising standard of living.

Pilling’s conclusion, which he has written in his book The Growth Delusion, is that only

'... in economics is endless expansion seen as a virtue. In biology it is called cancer.'

Even The Productivity Commission, Australia’s respected authority on economic productivity, does not express the same enthusiasm as the signatories of the Compact in regards to our migration program. In their inquiry into Australia’s migration program, it was reported that economic migration contributes a relatively modest 5% to national GDP.  In comparison, some studies have demonstrated that infrastructure costs to support this high population growth may exceed 12% of GDP. Therefore, there are convincing arguments that, even is we use GDP as a yardstick for success, Australia’s annual population growth of 395,000 per year may be costing instead of benefiting us. Growing at the rate of a new Canberra every year does not come cheap.

Concise review of the "The Growth Delusion" in this week's Nature pic.twitter.com/798HZdjja1

If we are to consider that there are physical limits to growth, the Compact’s first principle is short sighted. There will come a stage when we will have to consider an economy that is not reliant on population growth to sustain it. Australia cannot grow at 1.6% per annum indefinitely — the laws of physics do not allow for exponential growth on a finite space. Some estimates have been provided to quantify Australia’s long term carrying capacity. Tim Flannery has previously estimated 8 to 12 milion, The Australian Academy of Scienece suggests 23 million. Our current population exceeds both estimates. Businessman Gerry Harvey believes we can grow beyond 100 million, but it is probably wiser to side with the scientists on this occasion.

There is an impression from the Compact that its union creators value economic growth more highly than they do worker rights. Although the direct link between population growth and unemployment is contentious, it is nevertheless true that tertiary institutions are losing funding whilst underemployment among new university graduates is rising. We need to address some of the root causes of skills shortage, such as funding cuts to our education system. Otherwise, if a domestic skills shortage is a justification for a high skilled migration program, there is a risk this will turn into a self fulfilling prophecy.

Whilst the Compact stresses the importance of diversity and participation in society, it has clear parameters on the profile of the people they wish to attract to Australia. That is, people with a proficiency in English, with tertiary qualifications and capital. There is no mention of increasing our humanitarian intake. Economy and business remain the ultimate goals.

Meanwhile, new skilled migrants are finding it difficult to even afford the outer multicultural gateway suburbs of Auburn (Sydney) and Springvale (Melbourne). So much for access to services and opportunities as stated in the Compact. There has also been systematic exploitation of the economic migration program, with the 7-Eleven scandal being a recent example. This has much to do with the lack of access that new migrants have to employee rights and social services, which the unions supposedly serve to protect. An increasing number of people will become vulnerable to the loopholes in our system if population continues to grow without fundamental changes in the system to protect the rights of migrant workers.

Given that several of Australia’s key union bodies have joined forces with the Business Council in regards to the Migration Compact, this may be indicative that unions and big business alike are starting to read from the same neo-liberal rule book. This is disappointing, when we should be coming together as a society to deeply consider alternatives to growth. For example, at a time when millions of people are displaced worldwide, Australia could be a world leader in assisting global population issues through investing in family planning services abroad and adopting a more responsive humanitarian program. This seems more rational than pumping coal and building roads to service a never ending growing domestic demand for energy, infrastructure and services.

Let us hope that the Compact does not succeed in its aims to shut down debate and Australians continue to have open conversations around this very important issue.

The Australian Industry Group and the ACTU have signed a historic compact urging ‘no reduction’ in the annual rate of permanent migration to Australia https://t.co/tIe19qtJYK

Unfortunately “Jobs & Growth” is a bipartisan position in Oz #auspol Inside the ‘just add people’ dogmahttps://t.co/6U76RUFErZ

George Monbiot must bring population back to the table

6 September 2020, 8:00am Activist and writer George Monbiot's ideas on the link between environmental ...

A migrant perspective on living in Australia’s growth corridors