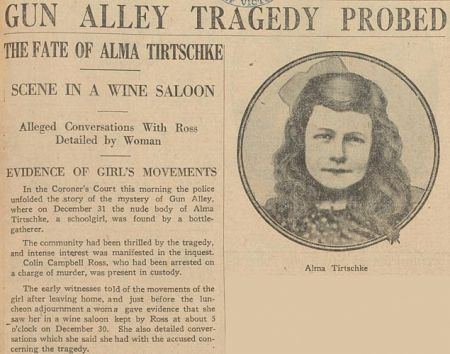 WAY BACK in the 1940s, when print papers were the only reliable source of the daily news, I was a cadet police roundsman on Frank Packer’s Daily Telegraph, the most popular and biggest selling newspaper in Sydney.

The editor was Brian Penton, a fierce, red faced little man, a brilliant, perfectionist editor and writer whose creed was accuracy and truth and who battled government censorship in World War II by leaving blank spaces in the paper. His portrait, painted by William Dobell, won the Archibald Prize and hangs in the New South Wales art gallery.

There was a joke around the office:

“What is the difference between a reporter and a journalist?”

“A reporter has only one suit. A journalist has two.”

Reg didn’t even have one suit. He wore the same red sports coat and brown slacks every day. He mumbled in monosyllables, just like Humphrey Bogart in “The Maltese Falcon.”

But when he sat down to his Underwood typewriter, he would fill electrifying reams of copy paper.

Early one morning, I got a tip from a police contact that there had been a murder at a luxury block of flats at Point Piper. An old lady had been mugged to death. I called Reg at home.

“Get a car,” he said, “radio me at the office when the skulls get there. But don’t go inside.”

The Telegraph’s cars – big black 1940s American models with a radio aerial waving on the back – came with a driver, who was always a guy with a funny sense of humour. One driver had a habit of mentioning that today was his birthday, hoping that we would shout him a beer. We waited, observing the flats for an hour or so until another big black car arrived with an aerial on the back. Four big men with felt hats and double-breasted dark suits got out, one carrying a large Gladstone bag.

Tele the cadets were given lectures by senior reporters and lawyers, and when I recall those lectures today my mind goes immediately to the dreadful things the Murdoch newspapers in Britain had been doing that had bought down the full force of the British law upon them and the Leveson inquiry; how NOT to cover a murder story, fully demonstrated.

Rupert’s father, Keith Murdoch, was appointed editor of The Herald in Melbourne in 1921. Keith had previously worked for two years in England establishing a fast cable service for providing World War I news to various Australian newspapers. He had also struck up a friendship with the mighty Lord Northcliffe, owner of The Times and the most powerful (and erratic) publisher in England.

When he became editor in Melbourne, he corresponded with Northcliffe asking for advice on layout and presentation how to be an editor and how to increase circulation. In a reply to the latter, Northcliffe wrote:

On the very last day of the year 1921, Keith Murdoch got his murder story and a tremendous circulation boost. The Herald’s popular Saturday sports edition beat all the morning newspapers by 48 hours. (There were no Sunday papers in Melbourne then.) During the next two weeks, he almost brought down the government. The Victorian Premier was Harry Lawson, who led a minority Liberal Government. (It was before the Liberals formed the coalition with the Country Party to try to keep Labor out of government forever.)

It was New Year’s Eve, a Saturday, when the naked and bruised body of 12-year-old Alma Tirtschke was found early in the morning by a bottle collector in a small alley off Little Collins Street, named Gun Alley.

For the next fortnight, The Herald’s front pages blazed with front page straps in huge black type:

GIRL OF 12 STRANGLED AND LEFT IN LANE

Murdoch wrote a front page editorial for the Monday edition. It began:

'A monster exists in this city free to indulge bestial and brutal instincts, the monster who murdered little Alma Tirtschke in the heart of the city.'

Alma Tirtschke was a pretty girl with distinctive auburn hair; that is, reddish-brown tending to gold. She had finished primary school at the top of her class. She lived in Jolimont with an aunt and her grandmother and within walking distance of Collins Street across Fitzroy Gardens and past Captain Cook’s Cottage. She had been sent on errand that morning to buy meat for the family’s New Year dinner the following day. Her parents were away working in country Victoria and were to arrive the next day.

The police were left with no clues, except a naked body. No clothes were ever found.

Melbourne’s other papers The Argus and The Age had taken a restrained view of the tragedy when they reported the bare facts on Monday morning.

But The Herald was becoming hysterical. Soon after the murder, The Herald offered a reward of two hundred and fifty pounds for information — a sum that represented the cost of a cottage in Collingwood in those years. The State Government became alarmed over The Herald’s dramatic headlines and unreal demands for the criminal to be found immediately. The premier announced a reward of one thousand pounds, enough to buy a three-bedroom home in Malvern. Hours of police time were wasted following useless leads provided by would-be claimants, to police stations and to The Herald.

Two weeks of front page coverage in The Herald had set off real panic in the community. Harry Lawson, a burly Australian Rules footballer and lawyer from Castlemaine, was already faced with industrial turmoil and a threatened police strike over pay and working conditions. The sensationalised murder of a child was an unwanted distraction. He called the police commissioner to his office.

The commissioner chose two of his hard men, John Brophy and Frederick Piggot — detectives who normally dealt with the most dangerous criminals in the Collingwood push. The first clue came from a barmaid, obviously interested in the reward. She worked in a city wine bar near where Alma’s body had been found. She told the detectives she had seen the young girl in the wine bar talking to the owner, a man named Colin Campbell Ross.

In the first grilling, Ross denied he had ever seen the girl. He said he had previously fired the waitress and she had made up the story. The police searched his home and found a blanket that contained bright coloured hairs.

After more questioning and Ross denying every allegation, the police locked him in a cell with another criminal, a very dangerous one, whom Brophy and Piggot had arrested on another matter. This man was to tell the trial that Ross had confessed to killing the girl.

Only a little more than three weeks after Alma’s death, Ross was found guilty on the evidence of the barmaid and the criminal and evidence from a scientist claiming to be an expert on hair. He said he was sure the hair from Ross’s blanket matched a hair sample taken from Alma. His decision was based on visual comparison using a microscope.

The Herald’s overzealous coverage must have left the jury of honest citizens of Melbourne with no option but a guilty verdict based on the evidence. The judge grimly sentenced Colin Ross to death.

Less than two months after the trial, Ross found himself standing on the same trapdoor at the Old Melbourne Jail that Ned Kelly had stood on many years before and said, “Such is life.” But worse was to come when the trapdoor slammed open. The hangman had failed to adjust the noose properly and Ross choked for 15 minutes before the surgeon was able to pronounce life extinct.

It was 70 years later that a librarian named Kevin Morgan, visiting the Office of Public Prosecutions, noticed the two hair samples that had helped convict Colin Ross in an old Crown Law Office file. He  persuaded the police to have hair samples checked again using modern DNA testing. The Commonwealth Police Laboratory in Canberra, equipped with the latest modern technology, conducted the tests.

The report was clear. The hair from the girl did not match in any way the strands found by Brophy and Piggot on the blanket.

Kevin Morgan believes he knows the identity of the real killer. He interviewed several members and descendants of the Tirtschke family. He was directed to Viola Tirtschke, Alma’s younger sister, who still lived in Melbourne in 1997. She told of a man known to both sisters and of whom they were afraid. He had often followed them and frightened them.

Morgan’s work left no doubt in his mind that Colin Ross was a second victim of the crime, and not the perpetrator, and revealed all his reasons in a book: “Gun Alley: Murder, Lies and Failure of Justice” (published by Simon and Schuster, 2005).

In May 1922, Keith Murdoch wrote a letter to Lord Northcliffe:

'You remarked to me that when a sensation comes, you would get all the readers you want. Perfectly true. I had only put on 8000 when we got a murder mystery, an unprecedented one, leading to such scenes as mounted police having to be called out to check the crowds about the residence of the supposed murder. That left us with a steady 125,000. Then came the trial when we were averaging 230,000 or thereabouts. We are lefty with a steady 140,000 now and I hope for a bit more.'

[NOTE: (10 September 2012) This article was corrected for some relatively minor factual errors on  identified by author Kevin Morgan. IA accepts full responsibility and thanks Mr Morgan for his attention to detail.]