A Candlelight for human rights

The 'Candlelight for human rights' is national creative art experience. It brings light to the fact that no actual basic human rights exist, or have existed, in our Constitution since Federation; this is one small step toward amending this inadequacy and it starts with just one candle.

Some people believe that the urgency to recognize Human Rights as part of our Constitution is minimal. Some will argue that we have rights in law, and other will slam the UN. Each are right to express their view. We agree and disagree this is the very nature of Human Rights; it begins with understanding, toleration and forgiveness.

The subtle problem exists where it may only impact on some of the people, part of the time. People who may suffer degradation of personal liberties are unable to seek justice and a just result. Many other injustices will go unnoticed, and the common excuse – it is out of our control, we have done all we can – fails to recognise, thereby, their own complicity. 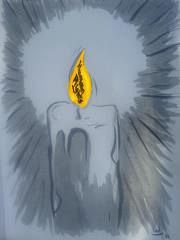 Australia has grown since Federation, over a Century has passed since the time the British Imperial Court authorized our Constitution and the capacity to form a Parliament on behalf of the Crown. A lot has happened since then, but it was not until the Hawke Government’s Australian Act passed into legislation in the late 1980s that our laws became truly binding — without the House of Lords looking over our shoulders.

Since that time, our Constitution, in essence, has remained unchanged. Its singular purpose is to form a Government and a Judiciary (the High Court). Recognition of Citizens is limited and vague. Section 116 ensures some religious freedoms, although this only applies to the Commonwealth and not to the States. Section 117, “as Subjects of the Queen”, is a poor relative to the equality residing in the American Constitution. There may also, perhaps, be a couple of other minor rights sprinkled throughout the document.

In particular, s117 offers the best way to introduce a Human Rights Bill. We ought not consider ourselves subjects of the Queen. Our basic Human Rights – of dignity, freedom of expression and pursuit of happiness – must be subject to laws of our own making and not subject to the Crown. These subtleties are what we take for granted, but must now also be inscribed upon our Constitution. In doing so, we set down just principles for all Citizens and persons who call Australia home. A set of principles that we will know as our Human Rights.

Australian is already a signatory to the UN convention on Human Rights, so it isn't that much of a leap to ensure that these, apparently, legal rights become truly enforceable. The 10th of December is significant as the date, way back in 1948, when the United Nations passed this Declaration of Human Rights. These principles and articles set down the basic agreed definitions of our Universal Human Rights. As Australia played a significant part in the document’s survival and authorship, it seems fitting to complete the job, allowing us all to become equal Citizens — subject to no Crown.

Personally, the most important thing I can give to my children is a secure future. To do this requires that the Constitution recognise their rights. As an artist, the only way I see available is through art.

A candle is universally recognized as a symbol of peace and liberty — the light of truth and justice. What better way to bring forth this vision than by social inclusion and National participation. The idea that a twinkle can become a glow requires not a candle but people. 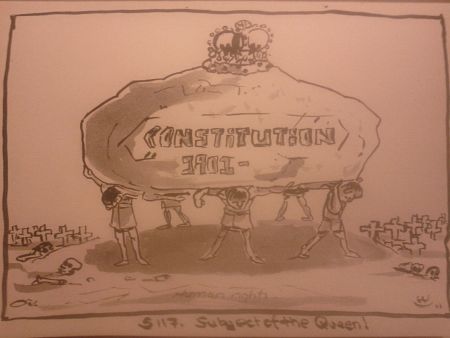 A Candlelight for human rights

New cartoons from Jeffrey Wood: 'Mooo!' and "On a roll"

18 June 2011, 2:54pm Our resident artist Jeffrey Wood has been busy with a mountain of study, but has ...
Join the conversation
comments powered by Disqus
News updates