Julie Bishop told the UN Security Council last December that the Arms Trade Treaty will stop arms flowing to conflict regions, yet despite being one of the co-authors, Australia continues to send arms to Israel. Dr. Vacy Vlazna asks if this makes Australia a party to Israeli war crimes and joins the Greens in calling for arms sanctions.

AUSTRALIA WAS proudly one of seven co-authors of the Arms Trade Treaty (ATT) and one of the first nations to sign on 3 June 2013 (ratified on 3 June 2014.) The ATT became binding in international law on 24 December 2014 requiring states to end transfer of arms that would be used in war crimes and genocide.

Article 6:3 of the Treaty states:

‘A State Party shall not authorize any transfer of conventional arms covered under Article 2 (1) or of items covered under Article 3 or Article 4, if it has knowledge at the time of authorization that the arms or items would be used in the commission of genocide, crimes against humanity, grave breaches of the Geneva Conventions of 1949, attacks directed against civilian objects or civilians protected as such, or other war crimes as defined by international agreements to which it is a Party.’

Israel is a prime target for ATT sanctions. The alarming Israeli documentary, The Lab by Yotam Feldman, reveals that 1.6 million Palestinians are locked in an Israeli military laboratory cage where weaponry is battle-tested on Gaza. Billions of international dollars from western defense departments, including Australia (see screen shot below) fuel the demand and validate Israeli atrocities, as told by Yotam Feldman:

“A key player in the military industries told me that the operational testing in Gaza of Elbit’s BMS (Battle Management System – a special internet-like system for ground forces), a huge project worth $1 billion, has allowed Elbit to raise its price in a deal signed a year later with Australia. The same goes for Rafael. The company stated openly that it would capitalize on the escalation that preceded operation Pillar of Defense. A salesman for the Israel Aerospace Industries (IAI) told me that assassinations and operations in Gaza bring about an increase of tens of percentage points in company sales”. 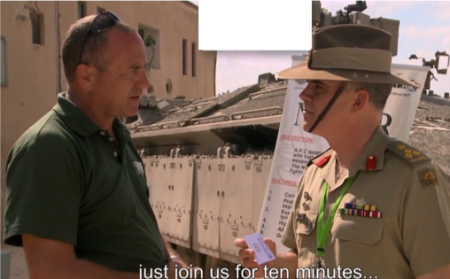 Screenshot from The Lab

To boost Israeli arms sales, Palestinian families have suffered three onslaughts of “systematic genocide” wars in six years and are condemned to a life that is unnatural, stressful and traumatic waiting for the next Israeli weapons testing that will again turn Gaza into ground zero. Gaza is a cemetery for over a thousand war-slaughtered children, a sealed death camp for 800,000 maimed and traumatised surviving children waiting, waiting, waiting for the next inevitable Israeli pestilence of bombs and sheer terror.

These are shocking statistics and evidence of Israel’s war crimes and crimes against humanity which must be seen in human suffering such as the story of little Hamza Mus'ab Almadani, 3, of Khan Younis, Gaza.

On 25 July 2014, Israel’s soldiers loaded and fired pale blue artillery shells that discharged white incendiary rain on Gaza in hundreds of phosphorous-impregnated felt wedges while Hamza and his family slept.

The white phosphorous struck and burrowed through his soft three-year-old skin. Phosphorous continues burning until the oxygen is blocked and even then, the extreme pain and the horrific tissue damage endures.

The agonising pain and trauma turned a once happy and boisterous child, mute. Hamza can no longer speak, a common symptom of trauma among Gaza’s children terrified by Israel’s relentless and tumultuous bombardments watched on distant hillsides by cheering Israelis in front-row seats.

We yet havent forgot how Ugly Israel is Israelis Watch Bombs Drop on Gaza From Front-Row Seats http://t.co/EBRPbYDVyw pic.twitter.com/OCCbfvPvdv

The Australian government has multiple defence contracts with Israeli private and government arms manufacturers worth over a billion dollars:

Australia exports to Israel parts and accessories for bombs, grenades, torpedoes, mines, missiles and similar munitions of war as well as cartridges and other ammunition and projectiles (including shot and cartridge wads and non-military arms). Can Australia guarantee its exports have not contributed to Israel’s war crimes? No.

The Greens passed a resolution in December 2013 calling on the Australian government to halt military cooperation and military trade with Israel.

Elbit Systems, the Australian subsidiary, on 15 August 2014 during Israel’s war on Gaza was occupied in protest by Australian activists to bring attention to Elbit’s complicity in the destruction of Gaza.

Elbit Hermes drones were one of the two main unpiloted aircraft used to attack people in Gaza during Israel's 2009 Operation Cast Lead attack, which killed over 1,400 Palestinians, According to Human Rights Watch (HRW):

"The Hermes can stay aloft for up to 24 hours at altitudes of up to 18,000 feet and has an array of optical, infra-red, and laser sensors that allow the operator to identify and track targets as well as to guide munitions in flight. The Hermes carries two Spike-MR (medium range) missiles.”

Further, HRW reports that the Hermes drone is equipped with a camera system, which allows the drone pilot to see if a person is armed or if they are a child or an adult. The drone's missiles are also equipped with cameras and can be diverted up to the last second. This means that Israel's drone pilots and their commanders would have known that they were targeting civilians and are culpable for war crimes carried out by Elbit drones. HRW has also called for the disclosure of camera footage shot by Hermes drones, to assist in the investigation of war crimes. Needless to say, this request has not been granted.

The assassination of Hamas commander, Ahmed Jabari – which precipitated Israel's 2012 Pillar of Cloud assault on Gaza – was carried out by an Elbit Hermes 450 drone, according to Defence Today.

Elbit's 7.5 Skylark mini-UAV, operational in the Israeli Army since 2008, was heavily used for support of ground military actions in Israel's 2014 attack on Gaza, Operation Protective Edge, which killed 2,191 Palestinians. The Hermes 450s and 900s were also used throughout this attack.

Elbit is owned by the Federman Group. Chairman Michael Federman is also chairman of the Hebrew University, which has R&D links, as do most Israeli universities, to Israel’s major arms companies, Rafael, Elbit, IMI, IAI.

For this reason, Sydney University’s Associate Professor Jake Lynch refused to work with Dan Avnon, an Israeli academic from the Hebrew University sparking a lawfare action against him by Shurat HaDIn. A case which Professor Lynch won.

Decent Australians can neither comprehend nor tolerate Israel’s war mongering against Palestinian children and their families whom Israel has hemmed in with no escape. The “most moral army in the world” is a vile coward - ultimately shooting innocent Palestinians like fish in a barrel.

It’s time for Australia to impose arms sanctions against Israel’s profit from death.

In an interview in The Real News, Yotam Feldman pointed out that the other problem is that the Israeli economy is now so dependent on these operations.

Unrelenting pressure by Australians must be placed on the government to fulfil Australia’s obligations to the ATT, which was the centre piece of foreign minister Julie Bishop’s presidency of the UN Security Council, as reported by The Guardian on 24 December 2014. Bishop told the UN:

‘The Arms Trade Treaty will help stop destabilising arms flows to conflict regions and to illicit users. It will prevent human rights abusers and those who violate the laws of war from being supplied with arms.'

Dr. Vacy Vlazna is Coordinator of Justice for Palestine Matters. She was Human Rights Advisor to the GAM team in the second round of the Acheh peace talks, Helsinki, February 2005 before withdrawing on principle.

2 February 2020, 11:30am Reflecting on Invasion Day’s proffering of national citizenship ceremonies,  a ...