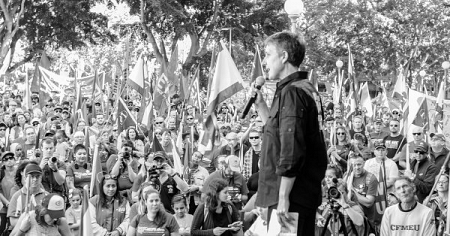 "She speaks quietly, straightforwardly, with no high-flown rhetoric or manufactured passion." (Image via @unionsaustralia)

ACTU Secretary Sally McManus arrived almost an hour late yesterday to address an overflow meeting in Canberra for the Unions ACT launch of the Change the Rules campaign. She’d come directly from addressing a crowd of 20,000 in Sydney. With public celebrations of the "Yes" vote on marriage equality still dominating the headlines, neither of these events attracted attention from the mainstream media.

That might not bother McManus too much. She’s playing a long game with this campaign, which began with a keynote address to NexGen17 and at Sydney’s Darling Harbour on 26 June, and is rolling out state-by-state across the nation. It’s a long game because in our current political arena, it’s the main game.

On the day of her election as first female secretary of the ACTU this year, McManus gained instant notoriety by declaring to Leigh Sales on ABC 7.30 that when the rule of law is unjust, she has no problem with breaking it. Political opponents jumped on the statement. In the next parliamentary Question Time, Malcolm Turnbull dubbed her "Sally McManarchist".

But this was no case of some rookie being caught out by a savvy political interrogator. McManus knew exactly what she was doing. The 7.30 statement was prelude to her debut speech at the National Press Club on 29 March, in which she staked out her position with chapter and verse.

She cited Martin Luther King on the matter of just and unjust laws:

An unjust law is no law at all. Think about that. That’s the principle behind Change the Rules. It’s a big and powerful assertion, going back deep in human history. In almost every cultural tradition, there have been movements to recalibrate the relationship between law and justice.

At the Canberra meeting last night, there were declarations from union representatives that now is the moment for such a movement to gain critical momentum.

Linda Morrison, a cleaner from the Canberra Hospital, was given a standing ovation for her account of union attempts to break through a five-year pay freeze for a low income and largely casualised workforce. When a long-term campaign of enterprise bargaining culminated in a pay rise of 64 cents a week, she said the response was:

"You have insulted every worker in this hospital."

In Britain, the pay of hospital cleaners has now fallen to below poverty level. Many are resorting to food banks as they have nothing left after paying the rent. The corporate contractors who employ them, meanwhile, often pay little or no tax. McManus has her eye on the main game because she is out to us aware of how We the People are being taken to the cleaners by a coterie of high-end bludgers.

Her target is neoliberalism itself. She has put the word front and centre of her attack. What does this mean? Most definitions of neoliberalism revolve around the notion of free markets. Actually, that’s a misunderstanding. Neoliberalism, from its inception in European conventions in the 1930s and 40s, was determined upon an agenda of freedom and control: freedom for the corporate profiteers and traders; control over the rights and conditions of workers. Labour might be part of the free market, but labour organisations were never to be entitled to the entrepreneurial freedoms of corporations.

That’s where governments – small, as neoliberal ideologues would like them to be – come in useful. They serve to control the rights of workers and as brokers for the sale of public assets into private ownership. Even as the Turnbull Government teeters on the brink of collapse, there are continuing attempts to amend the Registered Organisations Act so as to increase the grounds for deregistration of unions and disqualification of officials, and impose constraints on union mergers.

Change the Rules seeks to draw widespread public attention to an impending social crisis caused by increased casualisation (now at 40% of the workforce), pay freezes, stringent control over union access to worksites for safety inspections and fierce penalties for strike action deemed "illegal" in accordance with laws that are, themselves, in contravention of United Nations principles and the standards of the International Labour Organisation.

All this, says McManus, amounts to an attack on democracy. Getting the message out there is where the union movement has its work cut out and the campaign launches this week were about that. McManus knows how to work the media when she needs it, but she also knows how to work a room. She speaks quietly, straightforwardly, with no high-flown rhetoric or manufactured passion.

Watching her as she addressed that gathering in Canberra, tired from a day in front of much larger crowds, it was clear that she knows how to manage her energy, how to balance attention between the different frames of activity in a major union campaign. Her strategy is the slow burn.

Jane Goodall is a freelance writer and Emeritus Professor with the Writing and Society Research Centre at Western Sydney University. You can follow Jane on Twitter @Jayrgoodall.

From 'cashless welfare' to basic income: An economic revolution

13 October 2019, 8:00am Rather than introducing the cashless debit card, we should seriously consider the ...

31 January 2018, 7:00am Bill Shorten's National Press Club address was strong on substance but his perfo ...

The Turnbull Government and negative gearing: Misleading the House?